Veterinary Vaccine Import to Russia in 2020


In 2020, Russia imported 15.32 billion rubles worth of veterinary vaccines (customs clearance included) from foreign countries except the EEU member states, down 9.4% in monetary terms (rubles) from 2019, because the importers were using up their stocks made in late 2019. The import volume in physical terms amounted to 7.15 million units, or around 43.4 billion dosages. The growth rates are -23.3% in units and -23.1% in dosages.

As for the EEU countries, the import volume amounted to only 0.9 billion rubles (wholesale prices, VAT excluded), or 5.5% of the total import. Besides, Belarus and Kazakhstan mostly imported those products that had previously been imported there. The production made in the EEU countries accounted for 0.8% of the import (see http://rncph.com/news/14_05_2021)

The import of combined vaccines rose by 16% in rubles and went down by 10% in dosages. Only five manufacturing companies imported combined vaccines to Russia in 2020, with Boehringer Ingelheim and Laboratorios Hipra having the highest growth rates: +50% and +44%, respectively. The import of Eurican, vaccines for pets, contributed to the growth rates of Boehringer Ingelheim, and Hiprobovis, vaccine for cattle, helped the growth rates of Laboratorios Hipra.

While the import of live vaccines rose by 10% in monetary terms, it fell by 24% in physical. Three importer are worth mentioning: Elanco (imports increased by 84% in rubles), Czech Biopharm (+78%) and Virbac Group (+77%). Elanco imported the AviPro vaccines, with IBD Xtreme, vaccine for infectious bursal disease, being the most popular of the line. Biopharm and Virbac Group imported only one product each: vaccine for poultry coccidiosis Livacox and Feligen for cats, respectively.

The import of inactivated vaccines dropped by 31% in monetary and by 2% in physical terms. Daesung Microbiological Labs increased their imports 10 times, while importing two vaccines. Their vaccine for porcine circovirus infection Circo Pigvac contributed to the growth rates.

Growth rates of the import of veterinary vaccines to Russia (imports from the EEU countries excluded) between 2015 and 2020, free circulation prices (customs clearance and VAT included) 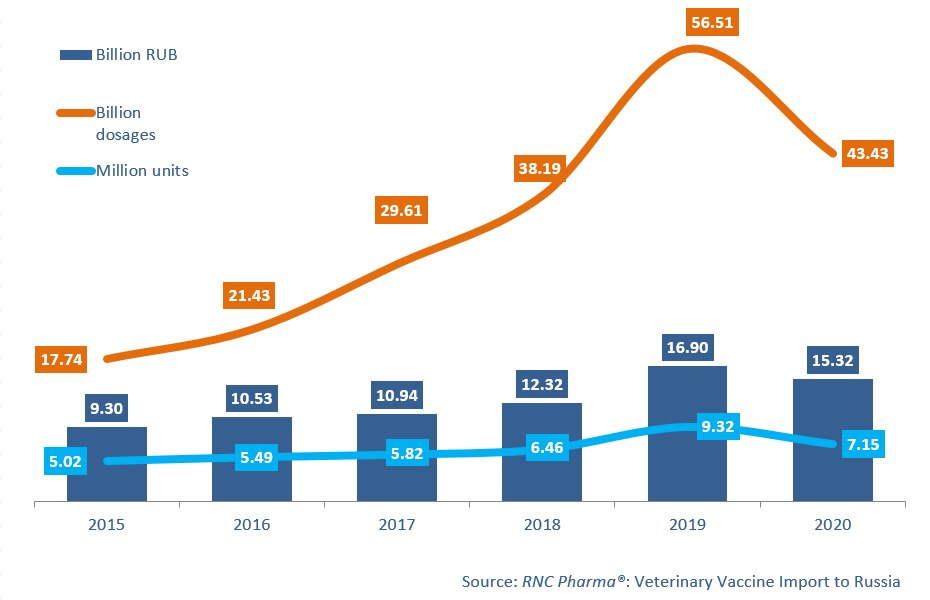