Between January and November 2019, Russia manufactured 383.9 bln RUB worth of pharmaceutical drugs (manufacturer’s prices, VAT included), which is in monetary terms (rubles) 25.8% higher than the production volume in 2018. In physical terms, the production volume is 4.1 bln units, or 67.2 bln minimum dosage units (MDU). The dynamics in physical terms are +6.5% in units and +5.3% in MDU.

Among the top 20 manufacturers of Rx drugs, Escom (Stavropol) has the highest dynamics, the company’s production volume has increased by 2.8 times in physical terms. Due to problems with the supplier of glass medical bottles in June 2018, the company had to stop production and resumed it only in April 2019, which makes the high dynamics seem like compensatory growth. Their key product is IV solution Sodium Chloride accounted for more than 61% of the company’s production and contributed to the dynamics the most. Escom is followed by Gedeon Richter with the dynamics in physical terms of 64%. Their key product is Verospiron, accounting for nearly 47% of the total production. The production of Verospiron has grown by 4.8 times.

Ivanovo Pharmaceutical Plant and Samaramedprom still have the highest dynamics among the top 20 OTC drug manufacturers, with +60% and 40%, respectively. The drugs that contributed to the dynamics of Ivanovo Pharmaceutical Plant are Sodium Tetraborate (production increased by 10 times), Ammonia (by 4.6 times), and Castor Oil (by 4 times). For Samaramedprom, it was Pertussinum (by 5.4 times) and Vaseline (by 4.5 times). 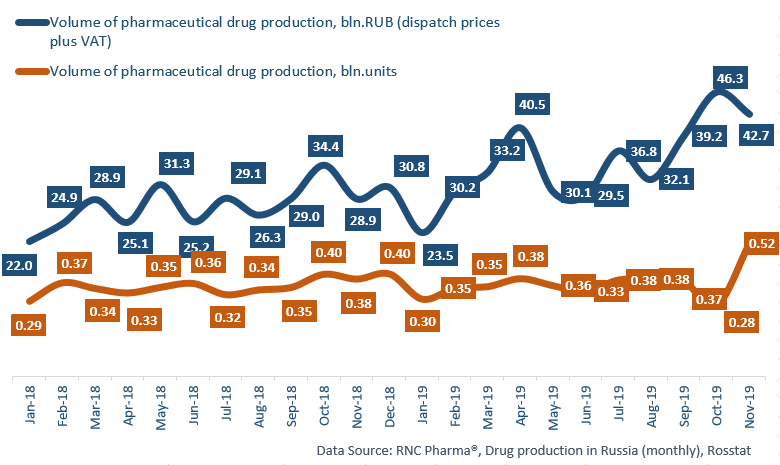