Between January and June 2020, Russia imported 12.2 bln RUB worth of pharmaceutical drugs for clinical trials (CT) (customs clearance and VAT included), which is in monetary terms (rubles) 49% higher than in 2019. The dynamics in physical terms (units) are also positive, +40%, with the import volume of 472 thousand units.

Selpercatinib by Eli Lilly accounts for the biggest import volume in monetary terms among the new pharmaceutical drugs, which Russia started importing in Q2 2020. Two parallel studies are currently underway, both multicenter, randomized, open-label, phase III trials to compare the drug with alternative treatment regimens in patients with advanced medullary thyroid cancer, as well as advanced or metastatic non-small cell lung cancer. 16 clinical centers and 46 patients are involved in the study. The company received research approvals in February 2020, with imports starting in April 2020.

As for import volume in physical terms, ND0612 by NeuroDerm (Israel) is the leader. The product is a combination of Levodopa and Carbidopa in solution for continuous subcutaneous administration. It is currently undergoing a multicenter, randomized, double-blind phase III study, controlled by active drug, to study the efficacy, safety and tolerability of the drug in patients with Parkinson's disease. 25 people at 6 medical centers are involved in the study. The CTs were permitted back in 2017 to be later suspended and resumed only in 2020. 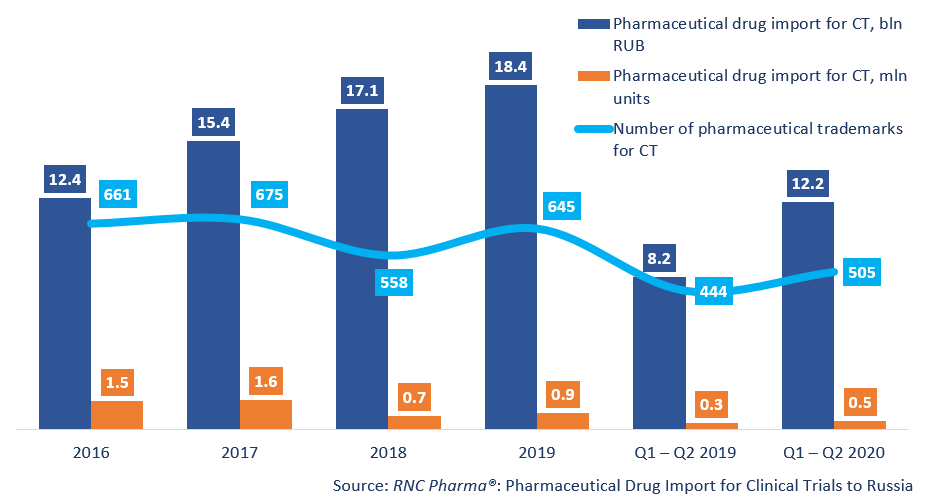