The performance in April is nowhere near outstanding, with a 22.5% fall in monetary terms, which is the worst dynamics over the past 40 months. The dynamics in physical terms, while not as bad as in March, are still negative, -13.2%.

Both the over-the-counter and Rx drug production witnessed negative dynamics, with the over-the-counter drug production having fallen by 12.4% and Rx drug production by 8.2 in physical terms. Among the top 10 EphMRA groups of second level that are leaders in physical terms, eight showed negative dynamics. The following groups showed the worst dynamics: antivirals (-35%), painkillers (-23%), and cold and cough medications (-21%). This is obviously due to a low incidence of influenza and ARVI, which was achieved through preventive measures, including vaccination (the incidence of influenza and ARVI has dropped by 2.3 times by March, with the incidence of ARVI alone decreasing by more than 10%.)

Despite that, we also witnessed positive dynamics. Avexima and Slavyanskaya Apteka are the leaders in the over-the-counter drug production, with a 3.3 and 2.4 times increase, respectively.

The worst dynamics among the Rx drug production are shown by solutions for intravenous injection (-34%) and anti-inflammatory and anti-rheumatics medications (-24%), while the best dynamics are by Promomed (+67%) and Atoll (+37%.) 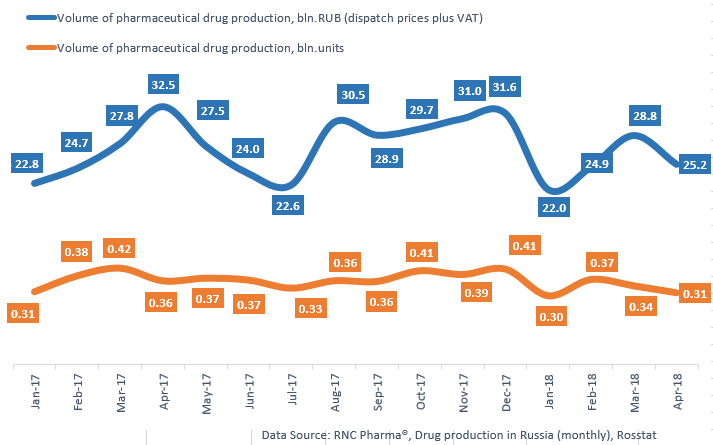