Survey by RNC Pharma and Doktor Na Rabote (Doctor at Work): 66% of Doctors Believe that Devaluation of the Ruble will Decrease Healthcare Availability


Only 5% of Russian doctors believe that the devaluation of the ruble will not change anything in the Russian pharmaceutical market, according to an online survey by the RNC Pharma analyst company and the Doktor Na Rabote (Doctor at Work) social media service for doctors. Another 2% expect that prices rises will decrease demand for “useless” drugs (vitamins, probiotics, etc.).

Unfortunately, those opinions are far from popular. Most of the doctors (37%) think that the ruble crisis will result in a decrease in the availability of drugs and hence an increase in self-medication, including by home remedies. This has already begun to come true, though not so much because of the devaluation, but the hype around the coronavirus disease. In particular, people have been buying up hydroxychloroquine preparations.

What consequences for the healthcare system will the devaluation of the ruble bring? (single-answer question) 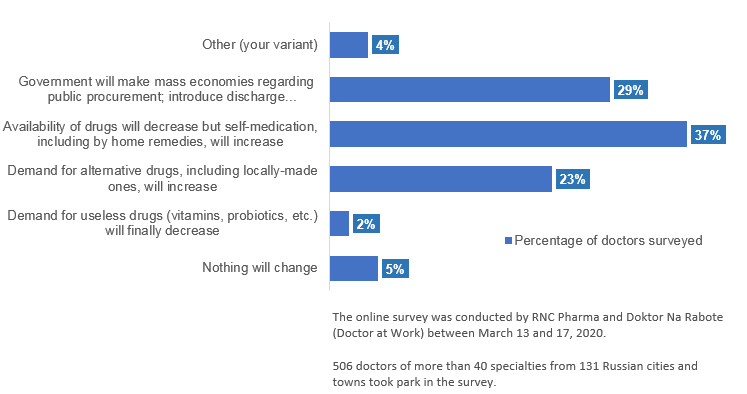