Database Update: Import of Pharmaceutical Drugs Made in EEU Countries to Russia (December 2018)


Between January and December 2018, Russia imported 9.4 bln RUB worth of pharmaceutical drugs made in the EEU countries (wholesale prices, VAT included), which is in monetary terms 13.1% higher than that of the same period in 2017. The dynamics in physical terms are only +0.9%. The total import volume from Belarus, Kazakhstan, and Armenia amounts to 213.6 mln units.

Belarus accounts for 90.5% of the total import volume in monetary terms and 89% in physical terms. In 2018, 12 Russian companies, including three new ones, imported from Belarus. Among the new companies, Farmgid with its Cefepime contributed to the dynamics the most. Among the top 5 companies with the biggest import volume in monetary terms, Alvils has the highest dynamics (a 2.8 times increase.) Alvils imported 4 trademarks, with inhalation anesthesia drug Sevoflurane-Vial amounting to most of the import. The import of the drug started in July 2018, and its production is localized at the facilities of Pharmland (Belarus.) Earlier, it had been produced by Lunan Better Pharmaceutical (China.)

Kazakhstan accounts for 7.4% of the import volume in monetary terms. In 2018, 4 Russian companies, including a new one, imported from Kazakhstan. The new company is Alvils, which imports Sulfacyl Sodium drops. The production of the drops is localized at the facilities of Dosfarm (Kazakhstan.) Nobel Ilac has the best dynamics (+44%), its most imported product is antibacterial drug Aksosef (a 4.4 times increase.)

Armenia accounts for only 2% of the import in monetary terms. In 2018, Yerevan Chemical and Pharmaceutical Company imported 6 trademarks to Russia, with Thiamine Chloride accounting for most of the import.

Dynamics and volume of import of pharmaceutical drugs made in the EEU countries to Russia, wholesale prices, VAT included (2016 – 2017, January – December 2018) 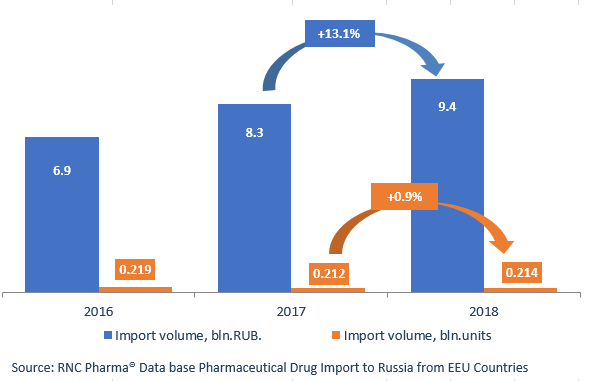