Between January and October 2020, Russia manufactured RUB 399.1 bln worth of pharmaceutical drugs (manufacturer’s prices, VAT included), which is in monetary terms (rubles) 17% higher than in 2019. These dynamics are significantly lower, compared to the dynamics of the period between Q1 and Q3. The dynamics in physical terms are even less promising: +12.4% in units and +15.2% in minimum dosage units (MDU). The production volume in physical terms amounts to 4 bln units, or 68.4 bln MDUs.

The dynamics in monetary terms has decreased due to a noticeable redistribution of the activity of pharmaceutical companies in October, when the second wave of the pandemic was in full swing and therefore, the demand for drugs began to change seriously, and the companies had to respond. The production of relatively inexpensive and high-demand drugs has grown significantly: 476.3 mln units in October 2020, which is 29% more than in October 2019. This year, only June had high dynamics, when the dynamics in physical terms nearly reached 70% before the launch of the labeling system. The dynamics in monetary terms in October 2020 were -7.3%, which is only the second negative result since the beginning of the year.

The following pharmaceutical groups have the best production dynamics in physical terms in October 2020: azalides (manufacture has grown by 3.5 times), antivirals (by 3 times), and rehydration drugs (by 2.4 times). Among azalides, the production of Azithromycin has had a noticeable growth. The drug was manufactured by 14 Russian companies, with Vertex (nearly 1.7 mln units), Atoll (1 mln units), and Replekpharm (0.97 mln units) accounting for the largest production volumes. As for Azithromycin by Replekpharm, only secondary packaging is held in Russia (at Berezovsky Pharmaceutical Plant in the Sverdlovsk region).

Rimantadine was the most produced drug in the group of antivirals (10.7 mln units), as well as the one with the highest dynamics (manufacture has grown by 9.4 times). While the drug was produced by 9 Russian companies, Usolye-Sibirskoye Chemical and Pharmaceutical Plant accounted for as much as 75% of the volume. The most likely reason is that the company independently produces the raw materials, while the others buy from Chinese manufacturers. To no one’s surprise, Rimantadine is followed by Umifenovir (sold under the brand name Arbidol). Pharmstandard has produced the biggest volume of the drug, 5.7 mln units of Arbidol.

Among rehydration drugs, the production of Sodium Chloride has increased by 2.5 times, with the production volume of 29.2 mln units. The Stavropol company Escom accounts for 75% of the volume.

The manufacture of alcohol-containing drugs also has shown good results in terms of dynamics: in particular, Gippograt has produced nearly 10 mln units of Limanovit, which has been pushing out traditional top sellers, such as Medical Antiseptic Solution, Ethyl Alcohol and Aseptolin. 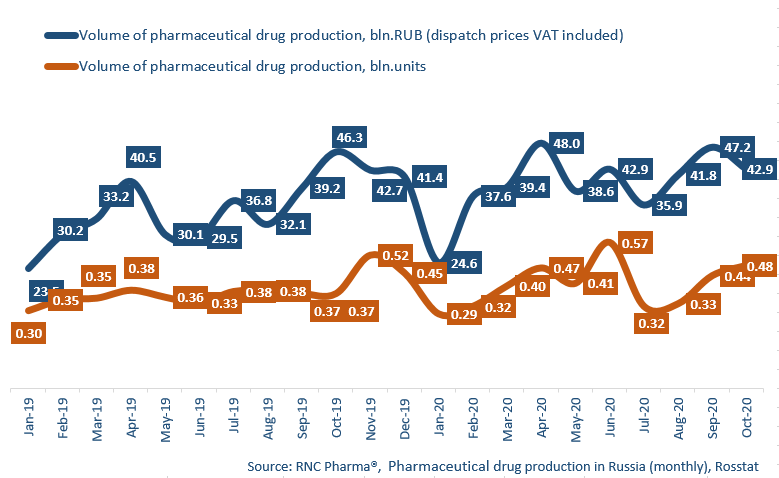