Between January and May 2020, Russia imported 69.7 bln RUB worth of APIs (customs clearance and VAT included), which is in monetary terms (rubles) 51% higher than in 2019. The dynamics in physical terms (kilograms) are +21%, with the import volume of 5.8 thousand tons.

Due to both the COVID-19 epidemic and the political situation in Russia, API importers have been actively looking for new manufacturing countries. Sweden and Slovakia are the most prominent among the new ones. Although Russia did not import APIs from Sweden between January and May 2019, AstraZeneca started importing Esomeprazolum from Sweden back in 2017. However, in February and March 2020 the number of importers started growing, in particular, Canonpharma has been importing Benserazide, and Nizhpharm Seawater from Sweden. And interesting fact: Nizhpharm used to buy APIs only from French manufacturers.

Slovakia is also hardly a new importing country, since Valenta has been importing Gramicidin C from Slovakia for a long time. In April 2020, FZ Immunoleks imported Natrii Deoxyribonucleas from Slovenia for the first time since July 2018.

The imports of antivirals Lamivudinum and Darunavirum have the highest dynamics in monetary terms among the top 50 most imported INNs between January and May 2020. The fact that the imports have increased by thousands of times can be explained by both low base effect of the same period in 2019 and price growth, in particular the price of Lamivudinum. Lamivudinum was imported by seven companies, with Pharmasyntez and Makiz Pharma importing the largest volumes. Only four companies imported Darunavirum, Pharmasyntez and Canonpharma Production accounted for the biggest volume.

The imports of Insulinum Glulisinum and Perindoprilum have the lowest dynamics in monetary terms among the top 50 INNs (-52% and -32%, respectively). Sanofi was the only company that imported Insulinum Glulisinum, and it did decrease the import volume. Out of the seven companies that imported Perindoprilum, only KRKA and Servier decreased the import volume. 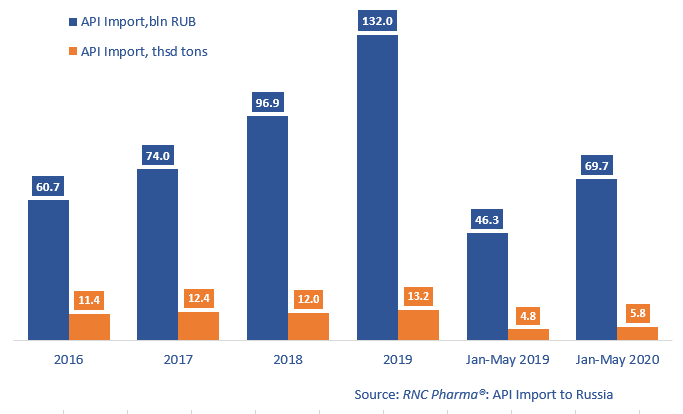