The total volume of API import to Russia reached an all-time high in 2020 in both monetary and physical terms, amounting to 14.4 thousand tons of APIs, worth 167.1 billion rubles (customs clearance and VAT included). The growth rates are +26.6% in monetary and +13% in physical terms.

In 2020, Russia was importing from 43 countries, with China accounting to largest import volumes in physical and monetary terms. Interestingly enough, the growth rates ended up that high despite the fact that the manufacturers had to halt production activities due to the pandemic. 23.4% of the importers in 2020 were Chinese companies against 18% in 2019. In 2020, China accounted for 54.7% of the import volume in physical terms against 51.7% in 2019, which was partly due to Indian companies reducing their imports.

The growth rates of the import of Heparin Sodium and Enoxaparin Sodium were the highest among the 20 most imported INNs in monetary terms: the imports increased 5.4 and 2.8 times, respectively. Both products were used in the treatment of the consequences of COVID-19, which mainly predetermined the import increase. Heparin Sodium was purchased by 17 different companies in 2020, with Veltrade accounting for the largest import volumes; the company’s imports of the API also rose 92 times. Enoxaparin Sodium was imported by only 8 companies, with Sotex having the largest import volume in monetary terms; the imports increased 9 times. While the import of Favipiravir, used to treat COVID-19, started as late as in April 2020, this API rounded up the top 20. Favipiravir was imported by 6 companies, with Drugs Technology accounting for the largest volume.

As for the most imported APIs in physical terms, the import of Lactulose, a product that had nothing to do with the treatment of coronavirus, excelled this year, increasing 49 times. It was imported by 3 companies, but Veropharm accounted for more than 90% of the total volume. This is a classic example of the effect of localization activity, since the production of the finished form of the drug Duphalac started in Belgorod in February 2020. One of the particular characteristics of the drug also contributed to the growth rates because a single dose of lactulose is dozens of grams.

The coronavirus infection did affect the import of certain APIs in physical terms: the import of Umifenovir rose 22 times, but this API is outside the top 20. 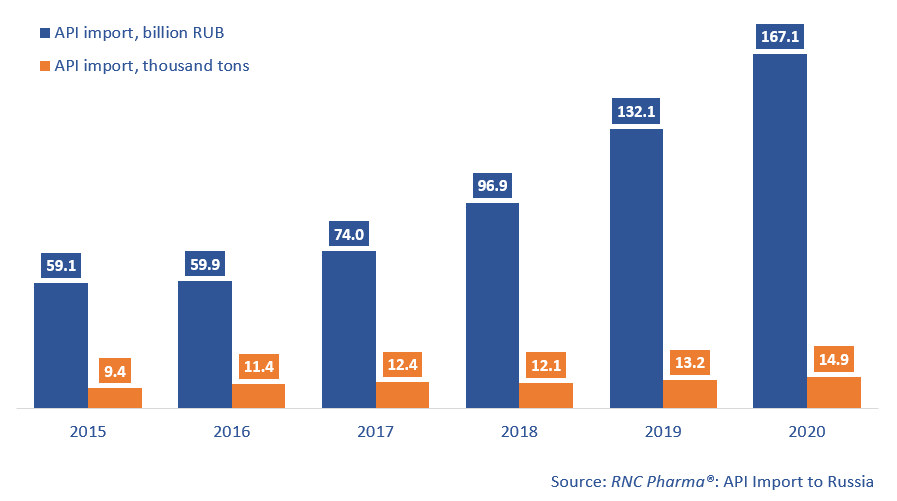