Between January and September 2019, Russia imported 98.3 bln RUB worth of APIs (customs clearance prices, VAT included), which is in monetary terms (rubles) 42% higher than that of the same period in 2018. This is the highest dynamics since the ruble devaluation in 2015, and the import volume of the first 9 months of 2019 exceeded the total import in 2018.

The import growth was in fact due to the price increase. The average prices of APIs has grown by 24% this year, to 10.3 thousand RUB for 1 kg. The import dynamics in physical terms (tons) are +14.4%, with 9.5 tons of APIs. While the dynamics are quite high, they are far from record-worthy.

The import line has grown from 723 to 765 API names. Russia stopped importing 120 APIs and started importing 162 new ones. Among the new APIs, Dolutegravir Natrium by Japanese Shionogi has the highest import volume. Russia started importing this API, used for manufacturing Tivicay by ViiV Healthcare, in February 2019. The production of Tivicay is localized at the facilities of the Russian plant belonging to French Servier in Troitsk. The total import volume amounts to 4.3 bln RUB (customs clearance price).

In the top 30 APIs, the import Dydrogesterone Granules (a 228 times increase) and Pantoprazole Sodium Sesquihydrate (a 215 times increase) showed the highest dynamics in monetary terms. Dydrogesterone Granules is imported from the Netherlands for the localized production of Abbott’s Duphaston at the facilities of Veropharm in Belgorod. Pantoprazole Sodium Sesquihydrate is primarily imported from Slovenia for the production of KRKA’s Nolpaza. Pantoprazole is also imported from Spain for Canonpharma Production and Protek-SVM and India for Akrikhin. 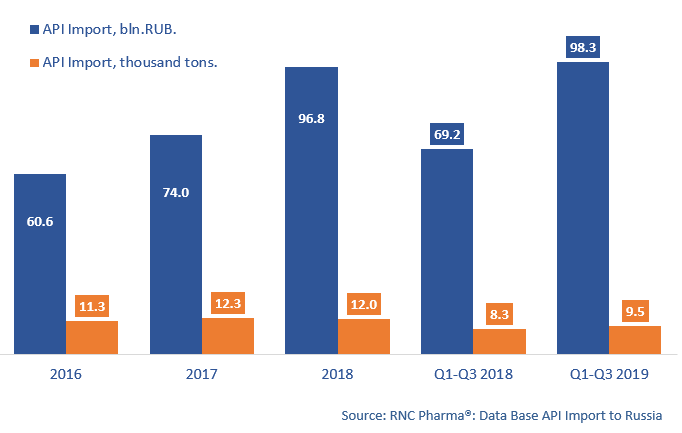