Between January and September 2019, Russia imported a little over 462 bln RUB worth of ready-made pharmaceutical drugs and 91.7 bln RUB worth of in-bulk drugs (customs clearance prices), which is monetary terms (rubles) 22.3% and 12.5% higher than that of the same period in 2018, respectively. The dynamics of the import of ready-made drugs are record-worthy.

The import volume of both ready-made and in-bulk drugs in monetary terms is as high as 80.2 bln RUB, which is the highest since January 2010.

Among the top 15 importers of ready-made drugs, BMS and Roche showed the highest dynamics in monetary terms, with 4.2 and 2.1 times increases, respectively. The import of two anti-tumor drugs – Opdivo and Yervoy – contributed to BMS’s dynamics: the import of Opdivo has increased by 5 times (to 7.4 bln RUB, customs clearance prices), and the import of Yervoy has grown by 4.5 times (to 1.6 bln RUB). The import of Alecenza contributed to Roche’s dynamics, having increased by 166 times, as well as Tecentriq (a 36 times increase).

As for the top 15 importers of in-bulk drugs, MSD has increased its import by 2.6 times, with 11.8 bln RUB. The import of its Keytruda, which accounts for 74% of the company’s import, has increased by 4.9. The secondary packaging of this drug takes place at R-Pharm’s plant Ortat. MSD is followed by Amgen, with a 2.1 times increase. Vectibix, Xgeva, and Nplate contributed to the company’s dynamics, with 3.5, 2.6, and 1.9 times increases, respectively. The secondary packaging of all three drugs takes place at Pharmeco’s plant Dobrolek.

Dynamics of import of pharmaceuticals, including homeopathic and seawater drugs, to Russia (imports from the EEU countries excluded), free circulation prices including customs clearance and VAT, RUB (January 2018 – September 2019) 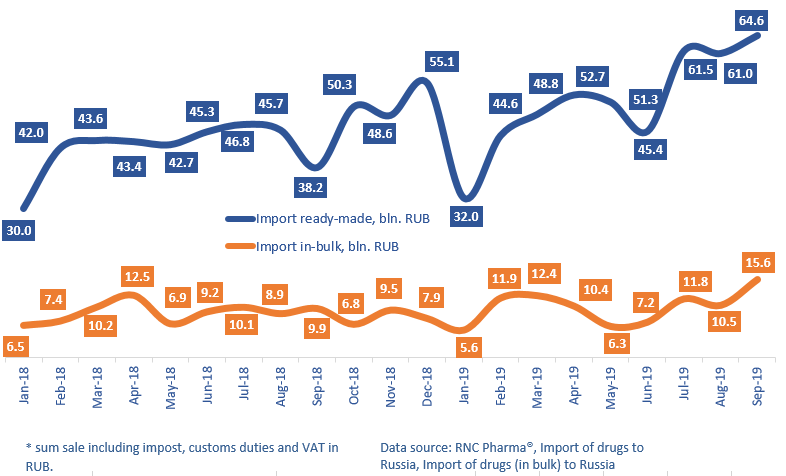