In January—August 2021, Russian manufacturers produced RUB 384.7 bln worth of pharmaceutical drugs (manufacturer’s prices, VAT included), up 23.2% from January—August 2020. In physical terms, the production volume amounts to 2.65 billion packages, with the growth rate of -14.7%. If calculated in minimum dosage units (MDU), the growth rate is -5%, and the production volume is 51.2 billion MDUs.

August saw way better results than the average in the past 8 months. Russia produced RUB 57.3 billion worth of pharmaceuticals, up 32.1% from August 2020. In physical terms, the growth rate has managed to get positive for the first time in 6 months, with +1.1%. If calculated in MDUs, the growth rate was +20.1%.

Only two companies in the top 20 have ten-fold growth rates. The first one is a branch of the Gamaleya Research Institute of Epidemiology and Microbiology, Medgamal, with its Gam-COVID-Vac and Sputnik Lite; the production on its own and contract plants increased 212 times against August 2020. The second one is Velpharm, doubling its production over the year thanks to its key product Azythromycin. The drug accounted for every 7th package manufactured by the company, and its production increased 29 times against 2020. The production of Diclofenac for injections, grew 23 times against August 2020. Dalkhimpharm has the worst growth rates among the top 20 companies, with -15% in physical terms, mostly due to the production of Dimedrol falling by 73%. 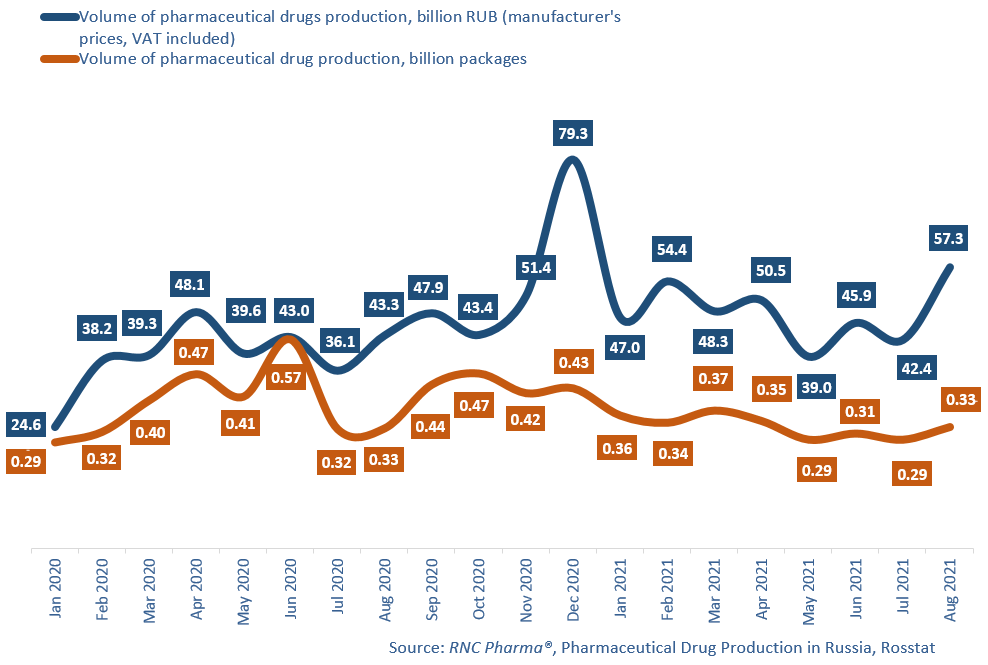