Veterinary API Import to Russia (First Half of 2020)


Between January and June 2020, Russia imported 1.17 bln RUB worth of veterinary APIs (customs clearance and VAT included), which is monetary terms (rubles) 7% lower than in 2019. The dynamics in physical terms (kilograms) are -25%, with the volume of 412 tons.

Dramatic changes in the demand for ready-made drugs did not cause the negative dynamics in both monetary and physical terms; the manufacturers have been using the stocks replenished at the end of 2019, when the dynamics were +70% in physical and +66% in monetary terms.

Antibacterial Tylosinum was the most imported veterinary API in monetary terms between January and June 2020. It was imported by nine companies, including both distributors of pharmaceutical and veterinary raw materials and manufacturers of veterinary drugs, with Simbio having the largest import volume. Tylosinum is followed by another antibiotic Tiamulinum, which was imported by six companies, and Vetline accounted for the biggest volume. Tylosinum is imported to Russia from Bulgaria (57% of the total volume in monetary terms) and China (43%). China is also the only country that imports Tiamulinum to Russia.

Tylosinum and Tiamulinum were also ones of the most imported veterinary APIs in physical terms (first place and 12% for Tylosinum, and third place and 9.3% for Tiamulinum). Tylosinum is followed by Amoxicillinum, which also accounts for nearly 12% of the total import. Amoxicillinum was imported by six companies, among which Protek-SVM imported the largest volume. (Protek-SVM imports from India, while the others from China.)

Nita-Farm is the biggest importer of veterinary API in monetary terms, with 18% of the total import volume. The manufacturer imported 27 different INNs; Levofloxacinum and Flunixinum accounted for the largest volume. Protek-SVM and Goros21.ru come second and third, with 11% and 10%, respectively. Protek-SVM imported 15 INNs (Amoxicillinum and Florfenicolum were their most imported APIs), and Goros21.ru imported 21 (Tylosinum and Amoxicillinum accounted for the biggest volume). 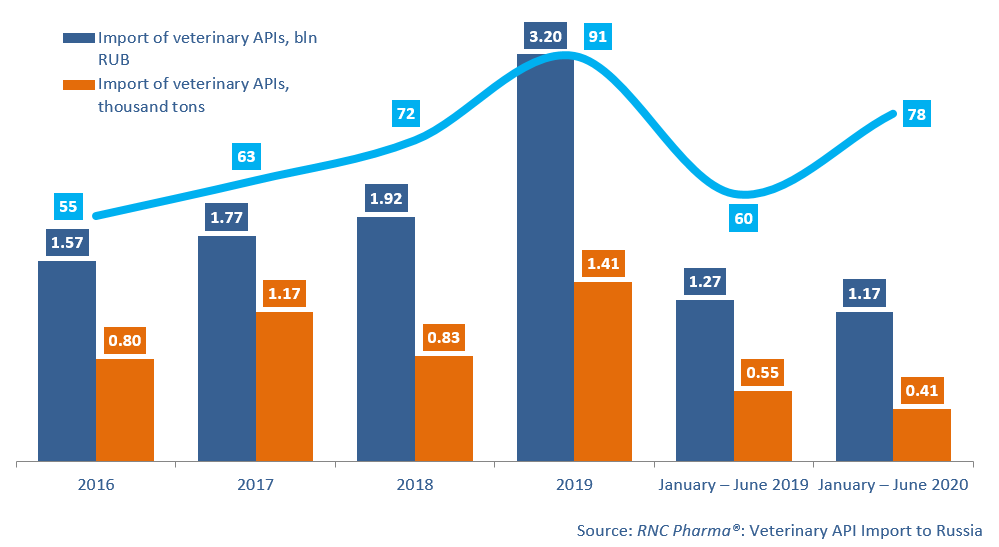