Pharmaceutical Drug Import to Russia (May 2020)

May was the first month of 2020, when the dynamics of the import of ready-made pharmaceutical drugs in monetary terms were positive (+16%). While not a drastic change, that did make the total dynamics for the period between January and May considerably better. The dynamics in physical terms (units) are +19% for May but -38% for the first five months of 2020, with the import volume of 0.45 bln units. If calculated in minimum dosage units (MDU), the dynamics are -33%, and the import volume is 9 bln MDUs. The difference in dynamics can be explained by the fact that the number of MDUs in every retail package averaged 20.7 in 2020 against 19.3 in 2019.

Shire Pharmaceuticals and BioMarin Pharmaceuticals have the highest dynamics in monetary terms among the top 20 manufacturers of ready-made drugs (imports grown by 3.9 and 2.4 times, respectively). The import of Shire’ Elaprase has grown by 4.3 times, and in 2019 the company did not import Replagal and Vpriv (the import of both drugs amounted to 750 bln RUB this year). BioMarin has increased its import of Naglazim by 1.5 times, but Vimizim and Brineura, which had not been imported a year earlier, contributed to the dynamics the most.

Just like in April, Astellas and Eisai have the highest dynamics in monetary terms among the top 20 manufacturers of in-bulk drugs (imports grown by 5.2 and 3.2 times, respectively). Among the companies that did not import to Russia between January and May 2019, Geropharm is worth mentioning. In April 2020, Geropharm started importing nootropic Recognan (oral solution) from Italy. the company produces Recognan in the form of solution for injections at the facilities of Moscow Endocrine Plant. Mirpharm is another “new” manufacturer on the list. In January 2020, it started importing antimicrobial Miroful capsules. The drug in ready-made form is manufactured in Italy and packaged at OKhFK in Obninsk, Kaluga region. 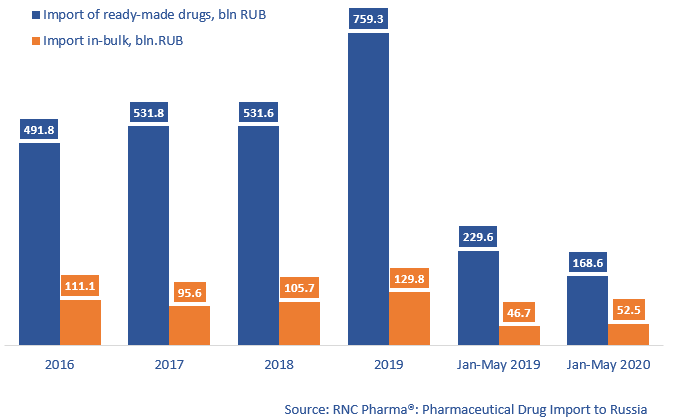