Between January and April 2019, Russia produced 127.4 bln RUB worth of pharmaceutical drugs (dispatch prices, VAT included), which is in monetary terms (rubles) 26.3% higher than that of the same period in 2018. These high dynamics are due not only to inflation but also to high production volume in physical terms (+4.1%). Russian manufacturers dispatch nearly 1.39 bln units of pharmaceuticals over the period.

The dynamics of Rx import are +8.7%, while those of OTC import are only +1.1%. Since the dynamics used to be negative, the results can be considered a success. Rx drug companies Kraspharma and Solopharm have the highest dynamics in this category for the first 4 months of 2019, +84% and +54% in physical terms, respectively. Kraspharma achieved these results mainly by increasing production and dispatch of systemic antibacterial drugs. In particular, dispatch of Cefotaxime has grown by 3.8 times in physical terms, while that of Bactsefort (Cefoperazone-sulbactam) by 6.8 times. Solopharm continued to increase production of solutions for intravenous administration, in particular Ringer-Solopharm (a 4.4 times increase), Acesol (3.2) and Disol (3.1).

As for OTC drugs, Pharmstandard and Marathon Pharma have the best dynamics, +40% and +31%, respectively. Pharmstandard’s high dynamics were achieved by higher dispatch of Citramon P (a 5.7 times increase) and Paracetamol (5.4). As for Marathon Pharma, the high dynamics were achieved by nose medicines; in particular, dispatch of Rhinorus (Xylometazoline) has doubled over the year. 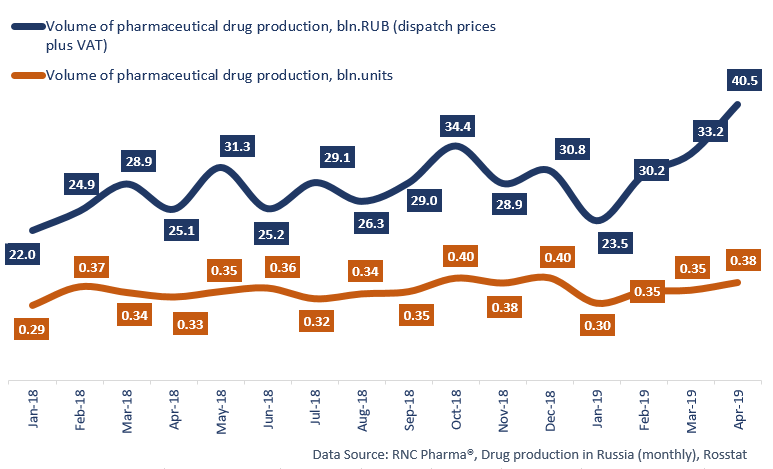