In April 2015, the Russian import of ready-made pharmaceutical drugs started to decrease, which is characteristic of that time of the year, but this year, it began a month earlier than usual. The volume of import fell by 14%, compared to March. In absolute terms, Russia imported 30.6 mln RUR worth of pharmaceutical drugs in April. In physical terms, the volume of import has decreased by 16% over the past year, which is also a sign of a downward trend.

Over the past 4 months, however, the import expenditures have been higher than those of the previous year, and there has been a 4-percent increase in the annual dynamics. The actual volume of import, on the contrary, has fallen considerably over the past year (-9%).

The preferred currency has not changed considerable over the past year. Payments in rubles were still prevalent in January – April 2015, and 91.3% of all contracts for the import of ready-made pharmaceutical drugs were concluded in rubles. As for the import of packaged products, there have been even more payments in rubles than in euros over the past year, with nearly 94% of contracts concluded in rubles. 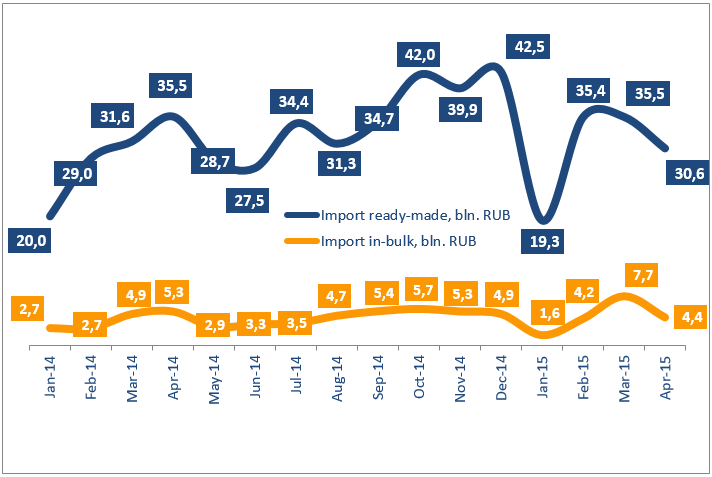