In January–November 2021, the sales of veterinary drugs in the Russian retail market amounted to 19.9 billion rubles (retail prices, VAT included), up 4.7% from January–November 2020. The offline segment is under severe pressure from the rapidly developing online business, since the online sales increased 3.2 times in monetary terms (rubles). In physical terms, the growth rate was –6.6% in monetary dosage units (MDU), with the total sales volume of 155.7 million MDUs.

Bravecto by MSD was the best selling drug among the top 20 trademarks in terms of sales volume. While it accounted for 12.9% of the sales in the offline retail market, the sales growth rate was only 3% in monetary terms. This, however, can be easily explained by the rapidly growing online segment—the online sales of Bravecto increased more than 5 times. (Read more about the online veterinary retail market here: https://rncph.ru/news/20_12_2021.)

As for Russian manufacturers, Agrovetzashchita (AVZ) is one of the most prominent companies. The sales of its Bars line fell by 5% due to the consumers choosing online shopping over in-store, but it is still only on top 18 in marketplaces. Antiparasitic Inspector by Ekoprom has the best growth rates in January–November 2021. 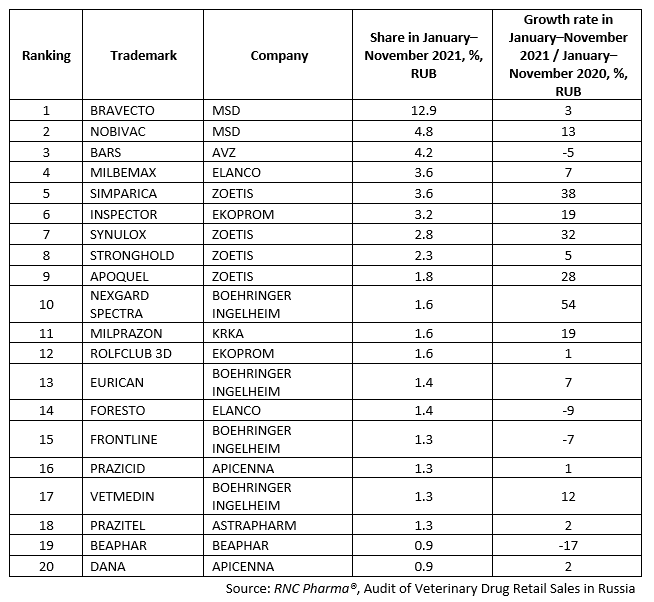