From January to September 2022, Russia imported 28.1 billion rubles’ worth of veterinary drugs (customs clearance and VAT included), 5.1% up from the same period last year. In physical terms, the growth rate was 7.6%, with 24.4 million packages imported. As for feed supplements, the growth rates in both monetary and physical terms are negative: –2.3% in rubles and –12.1% in tons. The import of feed supplements in January–September was 110,300 tons worth around 31.8 billion rubles.

In terms of the import of veterinary drugs, Q3 2022 was no less than impressive. It also determined how the result of the first nine months would look like. The growth rate of the veterinary import in Q3 2022 was 32.3% in monetary terms and 28.4% in physical. As for feed supplements, both Q2 and Q3 2022 saw some issues, in particular the sanctions, which affected the logistics. Apart from August 2022, the import of feed supplements in Q3 was falling: –14.4% in rubles and –6.4% in tons.

The number of veterinary drug brands was 504 in January–September 2022, down 106 brands from the same period last year. Among those drugs that are no longer imported into Russia, two drugs for livestock, Improvac by Zoetis and Cepravin DC by MSD, accounted for the largest import volumes. The vaccine Progressis by CEVA Asante Animale and the sedative drug Rometar by Bioveta had the best growth rates in monetary terms—its imports grew 785 and 338 times against January–September 2021, respectively. Both drugs are not new to the Russian market, but were barely imported in 2021. 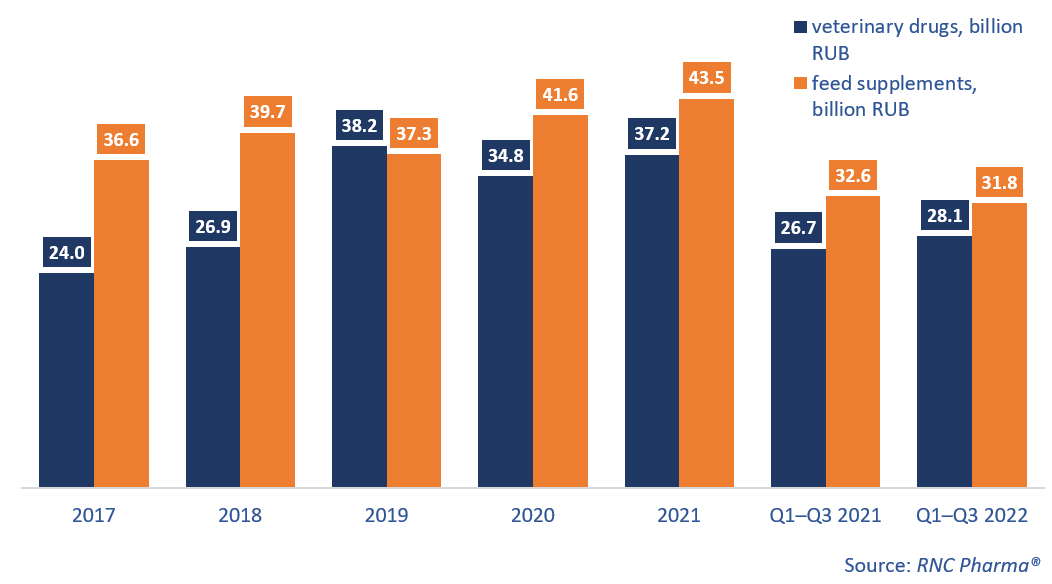