As for September 2021, the growth rate in monetary terms was +0.3%, which is the second best result this year. The total production volume was RUB 48 billion. In physical terms, the growth rates were negative: -24.4% in packages and -10% in MDUs. However, such modest results can be explained by the base effect in the past year, when September saw a peak in production due to an increase in the incidence of coronavirus infection. In addition, the range of manufactures products has changed significantly over the year; in particular, this year the pharmaceutical industry has reoriented itself to drugs that are more expensive.

Apart from a branch of the Gamaleya Research Institute of Epidemiology and Microbiology, Medgamal, no other top 20 manufacturer of Rx drugs had many-fold growth rates. At the same time, despite the decline in production, a number of companies managed to achieve a considerable gain. For example, Renewal increased its production 28% in packages. The production Anaprilin (increased 7 times from January–September 2020), Furosemide (3.7 times) and Piracetam (3.5 times) helped the company’s growth rates. Pharmasyntez had comparable results (+27% in packages) – thanks to a fundamentally different group of drugs, though. The production of the infusion form of levofloxacin, Bactoflox (3.9 times), and two hypoglycemic drugs Golda MB (2.7 times) and Merifatin (2.6 times) contributed to the growth rates the most.

As for OTC drugs, Valenta still has the highest growth rates in packages (+37%), with Trimedat and Ingavirin contributing to the success. Valenta is followed by Solopharm with +26%. The drugs that contributed to the growth rates were: Detriferol, a drug used to treat vitamin D deficiency (production increased 2.5 times from Q1–Q3 2021), and adaptogen Trekrezan (production doubled). Pharmstandard and Abbott, both of which increased their production by 25%, are also worth mentioning. Acetylsalicylic acid and Arbidol helped Pharmstandard’s growth rates; as for Abbott, it was Kreon and Duphalac. 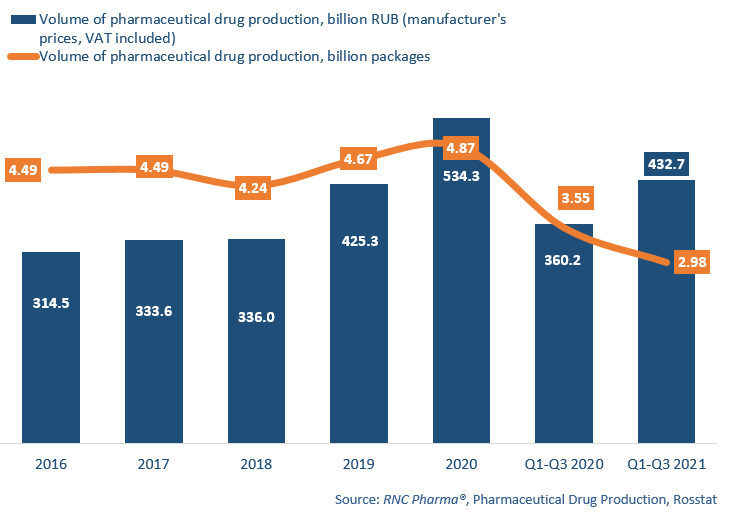