Between January and September 2020, Russia imported RUB 1.91 bln worth of veterinary APIs (customs clearance and VAT included), which is in monetary terms (rubles) 22% lower than in 2019. In physical terms, the import volume amounts to 802 tons, with the dynamics of -26%.

While the number of imported INNs is still the same (83), the import line has somewhat changed. In particular, 16 veterinary APIs are no longer imported to Russia (macrolide antibiotic Kitasamycinum, anticoccidial Monensinum and Alarelinum, analogue of gonadotropin-releasing hormone, were the three most imported APIs among those).

At the same time, Russia started importing another 16 INNs that had not been imported before. Among those, polypeptide antibiotic Nosiheptidum, imported by Nita-Farm, accounts for the biggest import volume in monetary terms. Nita-Farm has imported 1.2 tons of the API since January. Nosiheptidum is followed by antihelmithic Milbemycini Oximum, which was imported by two companies at once, with Ekoprom accounting for most of the import (5 kg). Antibiotic Benzathini Benzylpenicillinum, imported by Ruzpharma, rounds up the top three, with the import volume of 2.2 tons. All the three APIs were imported from China.

The import of antiparasitic Fipronilum has increased by more than 39 times in monetary terms, which is the best dynamics for veterinary APIs. It is imported by Ekoprom and Mirapharm from China. The imports of sulfanilamide Sulfadimidinum and antibiotic Oxytetracyclinum also have high dynamics (imports grown by 3.5 and 2.7 times, respectively). Sulfadimidinum was imported by seven different companies, with Vic and Nita-Farm accounting for the largest import volumes. The biggest importers of Oxytetracyclinum were Nita-Farm, Rusmedtorg and Eurosnab (out of eight).

Goros21.ru has the highest dynamics among the importing companies (imports grown by 29.6 times). During the period between January and September 2020, it was importing 24 veterinary APIs, with antibiotics accounting for most of the import, in particular, macrolide Tylosinum and Doxycyclinum. Interestingly, antibacterials take up nearly 80% of the company’s imports. Goros21.ru is followed by Mirapharm, which was importing 10 APIs, with antibiotic Ceftiofurum and antihelminthic Praziquantelum accounting for the largest import volumes. 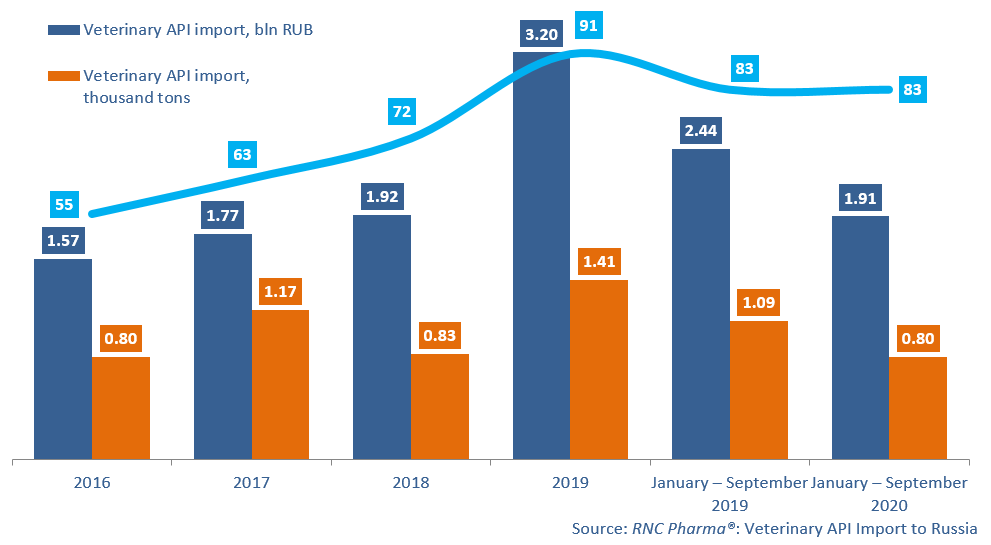