In June 2022, Russian manufacturers produced 54.9 billion rubles’ worth of pharmaceutical drugs, up 19.7% from June 2021, making it a five-month low. In physical terms, the growth rate was 7% in packages and 6.1% in MDUs. While these results are much worse than those a month earlier, the production volumes still grew, which could be deemed a success against the backdrop of an increased activity from March to May and the onset of the so-called “low” season.

Ingakamf had the highest growth rates among the manufacturers of OTC drugs in January–June 2022; its production grew 21 times against January–June 2021. Lapis pencil contributed to the company’s growth rates the most, although it is difficult to be sure that the entire volume is used for medical purposes, since the product is a popular tool for validating jewelry. Usolpharm also had impressive growth rates (production grew 19.2 times), manufacturing 24 products, which is nearly five times as many as a year earlier. It’s Corvalol and Paracetamol contributed to the company’s growth rates the most. Charoit Farma is also worth mentioning—its production increased 18.2 times against January–June 2021. The company is the holder of the registration certificate for Prostosorb, manufactured at the facilities of Flora Kavkaza.

As for prescription drugs, Alvils Holding had the best growth rates (manufacture grew 85.3 times), thanks to Phosphoglicerr and Dexamethasone. Lekvalis increased its manufacture 12.9 times against January–June 2021, with Metformin and Pantoprazole contributing to the growth rates the most. However, both companies are outside the top 100. Among the larger manufacturers, Ruzpharma (top 40) increased its production 3.6 times thanks to the manufacture of antibiotic Ceftriaxone. 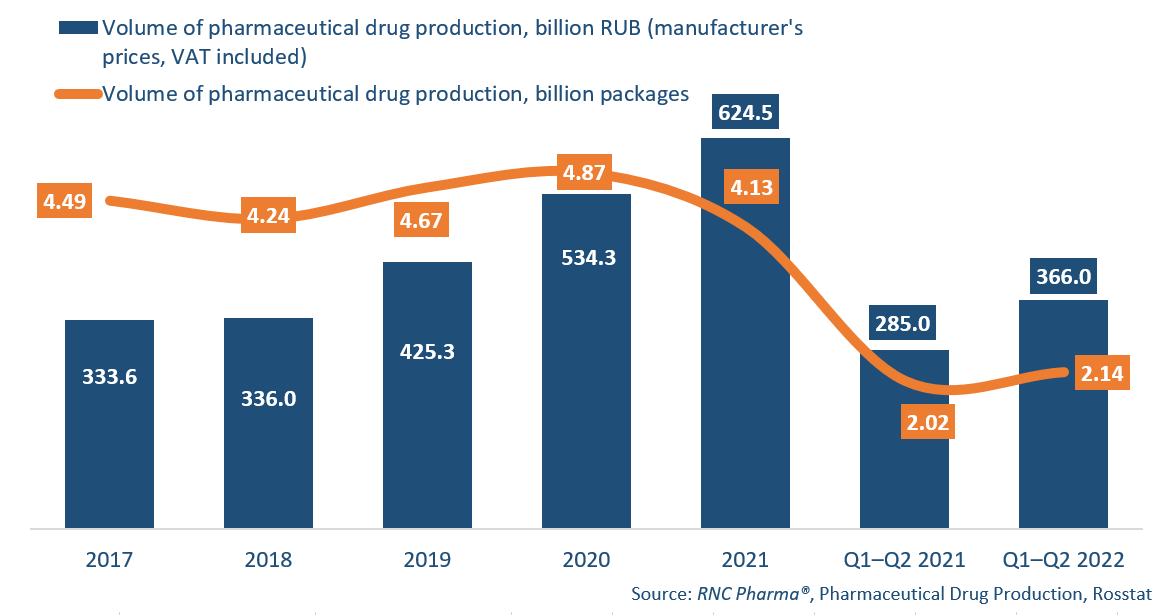