Earlier this year, the market saw a renewed growth in monetary terms and the long forgotten double-digit, which looks very impressive in contrast with the moderate results of 2018. However, the dynamics were mostly achieved by the state segment due to the events far from unexpected or inexplicable in the industry. As for retail, the dynamics were just beyond the inflation rates, while the actual demand continues to drop, which is logical due to income decline of the population.

The wholesale segment of the Russian pharmaceutical market developed naturally in direct relationship with these trends, hence the top companies with the highest dynamics and growth are state segment oriented. As for retail players, it is not that simple. First, the entire top 3 is falling to some extent, which, in fact, is the reason the industry leader has changed; the rating of the first three months of 2019 is headed by Puls. Second, the companies of the so-called second echelon are growing steadily, and while the dynamics are more modest than last year's results, Rosta and SIA International have basically been swallowed, and snatching the market from the top leaders is a different story.

However, this field is not that hopeless. For example, the leaders of the Russian pharmaceutical wholesale have changed the paradigm of relations with pharmaceutical chains regarding guarantees of payment and deferred payment. All this reduces the number of potential partners, and therefore affects the revenue, but most importantly, it opens up new development prospects for relatively small distributors. Manufacturing companies also contribute to this, and it includes not just a global review of relationships with chains. Many major suppliers, on the one hand, limit the number of wholesale partners, and on the other, stop prioritizing cooperation with wholesale market leaders, more or less equalizing conditions for distributors.

Finally, the above-mentioned trends have resulted in a change of the long trend of wholesale market concentration, and the total share of the top 15 distributors has noticeably shrunk. 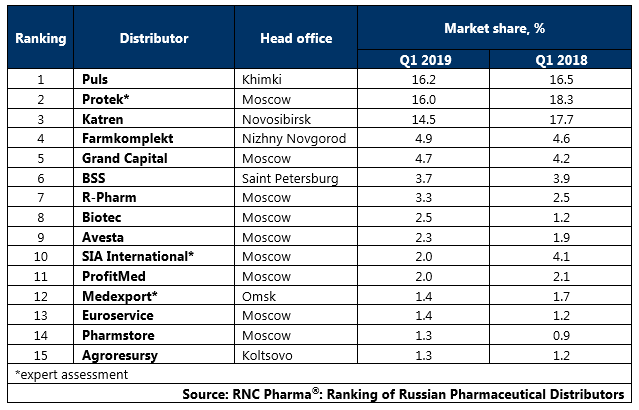