As of March 2018, the absolute leader in monetary terms is Kelun-Kazpharm (Kazakhstan), which accounts for 39% of the total import. Its import has increased b 4.5 times over the year. It is followed by Belmedpreparaty and Borimed (Belarus), with 27% and 18% of the total import.

Chimpharm (Kazakhstan) has the best dynamics, with a 20.5 times increase. The total import from Kazakhstan to Russia has risen by 5 times since January 2018.

Metronidazolum is the most imported drug, it accounts for nearly 18% of the import in monetary terms and has the best dynamics. It is followed by Ciprofloxacinum (16.4%), Both Metronidazolum and Ciprofloxacinum are mainly imported by Kelun-Kazpharm. In physical terms, the leader is Cyanocobalamin, with a 2 times increase over the year. It is imported by Yerevan Chemical and Pharmaceutical Company, its import to Russia has increased by 15 times over the year. 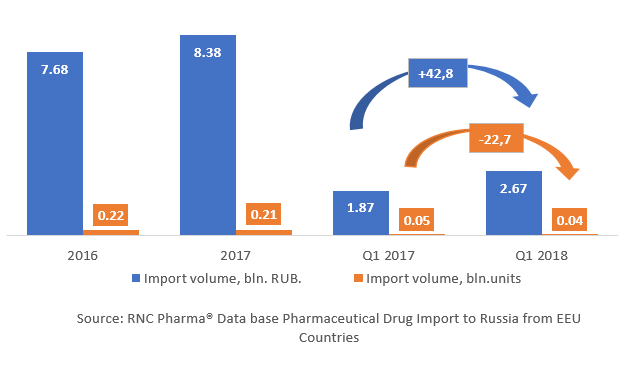