Between January and February 2019, Russia produced 53.6 bln RUB worth of pharmaceuticals (dispatch prices, VAT included), which is in monetary terms 14.3% higher than that of the same period in 2018. In physical terms, the dynamics are -1.5%, with 651.5 mln units.

The dynamics of the OTC drug production in physical terms are -4.6% for the period, while those of the Rx drug production are +3.7%. Among the top 10 EphMRA groups of second level which are leaders in physical terms, systemic antivirals (-43%), antirheumatics for local administration (-16%), and vitamins (-13%) have the worst dynamics. Among the top 10 OTC drug-producing companies with the highest dynamics in physical terms, Tatkhimpreparaty and Ozon have the biggest drop, -52% and -36%, respectively. Despite the overwhelmingly negative dynamics, there are still companies with positive dynamics. For instance, Samaramedprom has a 2.4 times increase, which is the best dynamics among the OTC drug-producing companies. 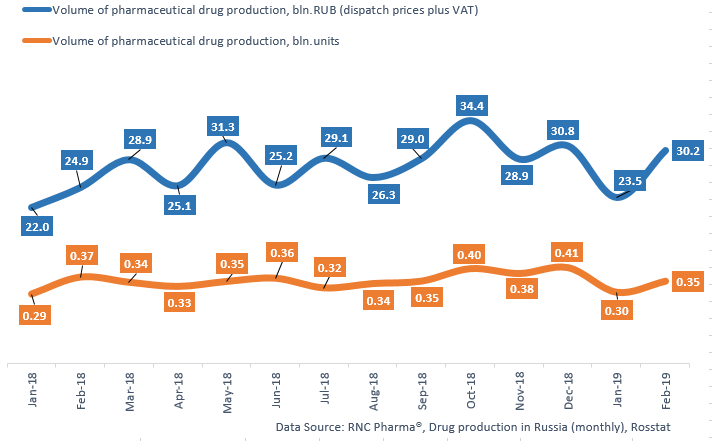