Russia imported around 242 bln RUB worth of ready-made pharmaceuticals in October and November 2019 alone, which contributed to the high dynamics, since it is close to the usual results of 6 months. The importers sought to form the necessary stock before a labeling system was introduced, although the introduction was later postponed. However, the stock formation had started long before that. Starting in July 2019, the dynamics were significantly exceeding seasonal trends. The import of ready-made pharmaceuticals in November 2019 has grown by 2.7 times, with 131 bln RUB.

The dynamics in physical terms vary more significantly. The dynamics of the import of ready-made pharmaceuticals are +21.7% in units and +22.2% in minimum dosage units (MDU). Between January and November 2019, Russia imported 2.06 bln units of ready-made drugs, or around 38 bln MDUs. As for in-bulk drugs, the dynamics are -20.2% (units) and 3.06 bln MDUs.

As for November 2019, Astellas and Roche have increased their imports by 16 and 12 times, respectively.

No in-bulk importer could boast the same high dynamics, though. Italfarmaco and Eisai have the highest dynamics, having increased their imports by 3.5 and 2.7 times, respectively. Gliatilin, packaged at Pharmacor Production, contributed to Italfarmaco’s dynamics, while Halaven and Lenvima, packaged at Pharmstandard, boosted the dynamics of Eisai. 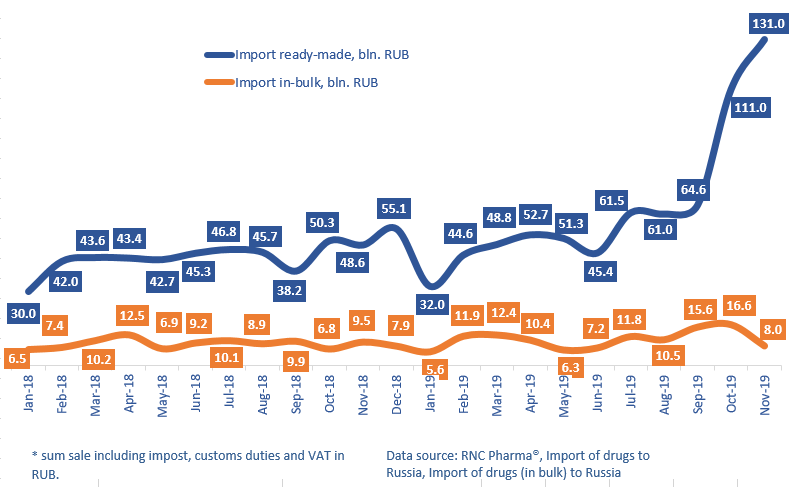