The relatively low growth rate in monetary terms was a direct result of deflation in the market (read more here: http://www.rncph.ru/news/22_07_2022). The high growth rates in physical terms were due to an increased activity of Russian manufacturers, as well as a natural urge to stock up on raw materials in a difficult time.

While the growth rate in monetary terms in June 2022 was negative (–14%), it is necessary to take into account the deflation factor already mentioned above and the fact that the special military operation practically cancelled the usual seasonal factors this year. In physical terms, however, the growth rate was as high as 57%.

The number of INNs imported into Russia in Q1–Q2 2022 was 583, 13 more than a year earlier. Rebamipide had the highest growth rates in monetary terms. Its import increased 121 times against Q1–Q2 2021, while not even breaking into the top 30 in terms of import volume. The main importer of rebamipide was Pro.Med.CS, which localized the production of Rebagit at the facilities of ZiO-Zdorovie in Podolsk, Moscow Oblast, in March 2022. Bismuth tripotassium dicitrate also had impressive growth rates (imports grew 11.8 times), with Astellas accounting for the largest volume. Its partner in Russia is ZiO-Zdorovie as well. Moxonidine is also worth mentioning (imports increased 10.6 times). In addition to high growth rates, the API set the precedent of transferring contract manufacturing—until March 2022, the API was produced at the facilities of the Nobel AFF in Kazakhstan, and in June 2022, all its forms were manufactured at Veropharm’s enterprise in Belgorod.

As for physical terms, the import of nifedipine had one of the best growth rates in Q1–Q2 2022—its imports increased 450 times against Q1–Q2 2021. Protek SVM bought the entire import volume, and Ozon was most likely to be the final recipient and manufacturer of the ready-made form. The import of pyrantel grew 227 times against Q1–Q2 2021, with Ozon accounting for the largest import volume. 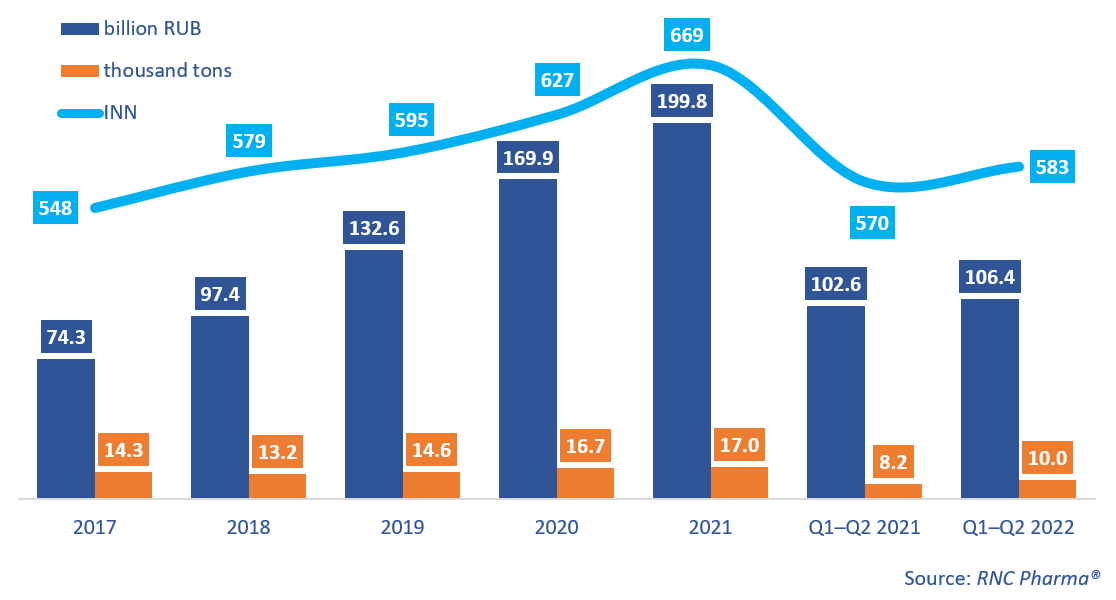