API Import to Russia (June and First Half of 2020)


Between January and June 2020, Russia imported 87.3 bln RUB worth of APIs (customs clearance and VAT included), which is in monetary terms (rubles) 54% higher than in 2019. In physical terms, the import volume amounted to 7.3 thousand tons of APIs, including commercial ones, with the dynamics of +25%.

As for the importing countries, Malaysia, Mexico, and Macao have the best dynamics (imports grown by 12.9, 6.4, and 4.4 times, respectively). While those countries are not new on the list, this year they have become many times more important. However, those countries import very few APIs; Dexamethasonum, Betamethasonum, and Methylprednisolone from Malaysia, Clavulanate Potassium + Сellulose Microcristallic, Rifaximinum, Tribromphenate Bismuth and Phosphomycinum from Mexico, and Doxycyclinum from Macao. Only Japan has comparable dynamics – +650% in monetary and -42% in physical terms – mainly due to changes in the import line. The import of more or less inexpensive APIs (Glycinum, Sevofluranum, Benphothiaminum) has either stopped or fallen, while the import of expensive APIs has multiplied. In particular, the import of Dolutegravirum has risen by 10 times in monetary and by 12 times in physical terms. KRKA-Rus has the highest import volume in monetary terms among the importing companies (import grown by 1.8 times). KRKA-Rus is followed by last year’s leader Servier, with the dynamics of -13%.

AstraZeneca Industries has the best dynamics (by 36.3 times in monetary terms), while importing only two APIs: Dapagliflozinum and Ticagrelorum. Full-cycle production of the corresponding pharmaceutical drugs (Forxiga and Brilinta) has been localized at the company’s facilities in the Kaluga Region. Biocom comes second, its imports have grown by nearly 17 times. Hydroxychlorochinum contributed to the dynamics the most due to an increased demand because of the pandemic. 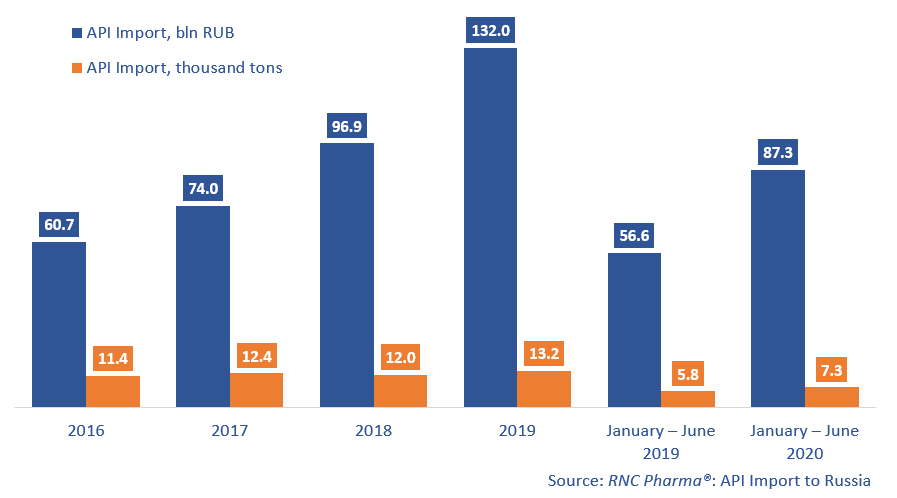