Pharmaceutical Drug Import to Russia (June and First Half of 2020)


Between January and June 2020, Russia imported 269.3 bln RUB worth of ready-made pharmaceuticals (customs clearance and VAT included), which is in monetary terms (rubles) 2% lower than in 2019. The dynamics were even lower in May 2020 (-27%), but in June, the importers sought to have their stocks replenished after it became clear that the launch of the labeling system would not be postponed again. As for in-bulk pharmaceutical drugs, the import volume amounted to 64.5 bln RUB, with the dynamics of +20%.

The imports of ready-made drugs started to grow back in May 2020, so that in June the dynamics in monetary terms reached more than 210%. The import volume was comparable to that between October and November 2019, in preparation for the first attempt to launch the labeling system.

As for the top 20 importers of in-bulk drugs, Astellas has the best dynamics (4.6 times in monetary terms). The product that contributed to the company’s dynamics the most was Flemoxin Solutab, packaged at the facilities of Ortat owned by R-Pharm in the Kostroma Region. Astellas is followed by Eisai (imports grown by 3.2 times). Halaven and Lenvima, packaged by Pharmstandard, contributed the dynamics. 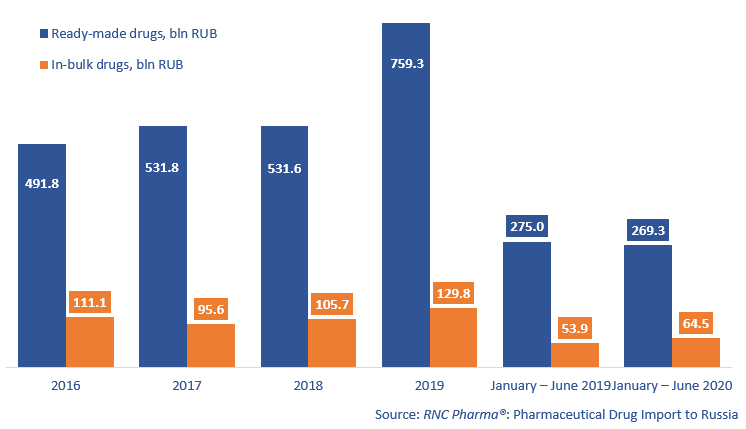