The e-commerce segment accounts for 13.1%* of the Russian pharmaceutical market in Q1 2021, against 9.7% in Q1 2020. We can see a natural process now, when customers are starting to choose the online segment over the conventional pharma retail.

In the analyzed period, the total sales volume of the top 20 companies amounted to 38.2 billion rubles (end-user prices, VAT included), which is around 82.7% of the online pharmaceutical sales. Interestingly, the shares of the top 20 companies have been dropping as a result of the active development of players outside the top 20. Apteka.ru is still the leader of the segment, with the share of 4% of the market (parapharmaceuticals included). The company’s growth rate is, however, very mild, +13%, which is lower than the general growth rates of the e-com market. The situation will probably get better after the company acquires a controlling stake in the Erkapharm group, but the general strategy of the service development, by adding new tools as well, will determine how long this effect will last. Otherwise, the company simply will not be able to resist the active development of its competitors.

Farmiya (Voronezh) storms into the ranking with the highest growth rate; the company’s sales increased 7.2 times. It is not the only company whose sales increased multiple times, though. The Moscow chain Vasha No. 1 comes second (sales increased 4.7 times), followed by Rigla (3.3 times) and Farmlend (2.7 times). Asna is also worth mentioning; its sales went up 2.5 times.

Not taking into account the results of Rigla and Asna, players outside the top 20 made a real breakthrough in the development of the e-com segment. In fact, this is why the shares of the top 20 companies dropped. However, the results of such companies as Sber Eapteka, Neopharm and Pharmacy Chain 36.6 are without exaggeration outstanding; all these companies with historically very well developed online services have double-digit growth rates exceeding the average growth rates, which is even technically a very difficult task against the background of the active growth of competitors. 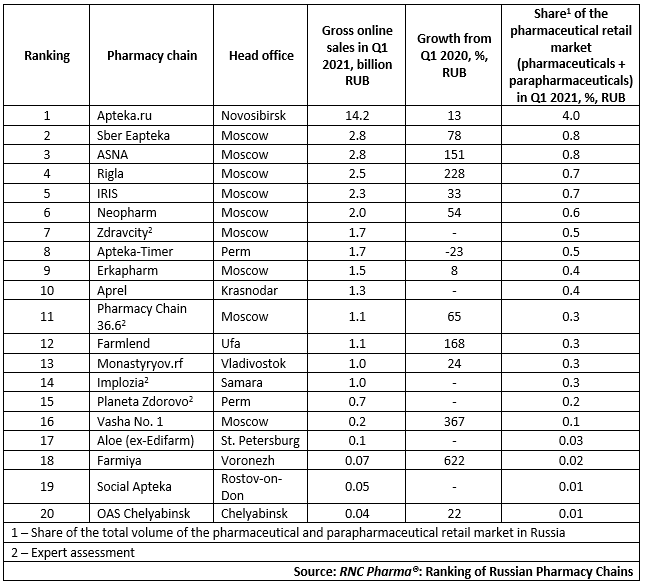 * Only organizations specializing in the sale of medicinal products were included in the ranking. The volumes mentioned do not include the revenue of representatives of the gray online business supplying original drugs to Russia from other countries and services selling generics unregistered in Russia