Survey by RNC Pharma and Doktor Na Rabote (Doctor at Work): 17% of Doctors Say They Have Witnessed Manipulation of Data on COVID-19 Deaths


While 61% of Russian doctors question the official COVID-19 death rate in Russia, they do not have evidence of the statistics being manipulated, according to an online survey by the RNC Pharma analyst company and the Doktor Na Rabote (Doctor at Work) social media service for doctors. Obviously, this reflects both a general distrust of the statistical service in the healthcare system, and purely methodological issues, such as a large number of people who did not experience any symptoms, the quality of the tests and collection of biological materials, etc.

At the same time, 17% of the doctors say that they have collected facts of the statistics being manipulated; most often, it is downward bias, but some believe that upward bias is possible as well. There were significant differences in response rates of male and female doctors. 21% of the male respondents and 15% of the women said they had evidence of manipulation.

About 9% of the doctors do not question the existing statistics. Here, we can also see some gender differences. The male doctors are less likely to trust official data; only 6 of the men and 11% of the women agree with statistics. However, the responses from various regions did not have statistically significant differences.

Do you trust the official COVID-19 death rate in Russia? (single-answer question) 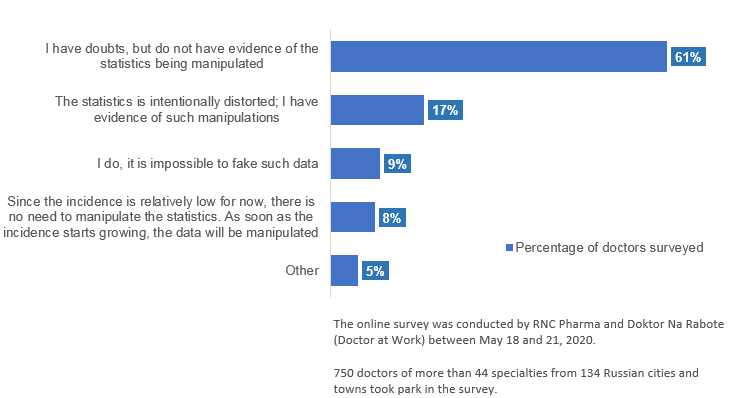