Survey by RNC Pharma and Doktor Na Rabote (Doctor at Work): 53% of Pharmacists Will not Start Online Sales Even after Official Permission


33% of pharmacists say that they consider online drug sales to be unethical, according to an online survey by the RNC Pharma analyst company and the Doktor Na Rabote (Doctor at Work) social media service for doctors. Another 20% noted that they simply would not be able to compete with large online retailers, which makes online development pointless.

It is interesting that even despite the formal ban, 13% of the respondents say that they started an online store a long time ago, so that they will not lose the competition. There were statistically significant differences in the responses of representatives of pharmacy chains and independent pharmacies, in particular, 31% of the respondents working in a pharmacy chain store said that their chain either already have an online store, or have long been preparing to open one. However, only 2% of the pharmacists from independent pharmacies chose this answer.

About 22% of the respondents will decide on the possibility of opening an online store only after the official permission is given. This answer was mainly chosen by employees of Moscow pharmacies, while those working in other regions spoke more often about how it is unethical to sell pharmaceuticals online.

Are you going to start an online store after online sale of pharmaceuticals is officially permitted? (single-answer survey) 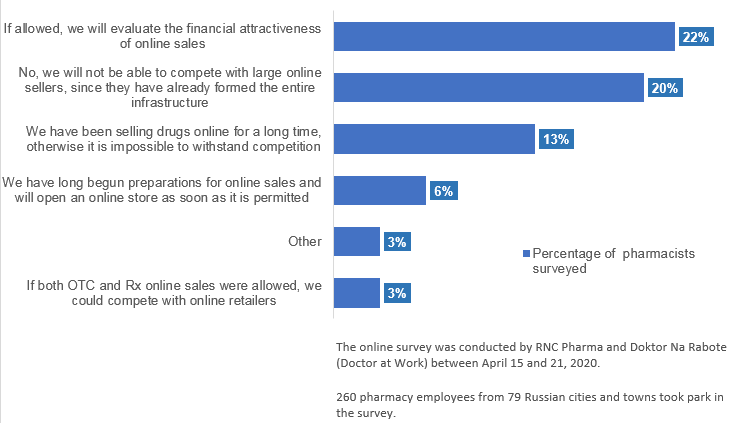