From January to October 2021, the sales of veterinary drugs in the Russian retail market amounted to RUB 18.5 billion (retail prices, VAT included), up 5% from January–October 2020. The most important factor for the growth rates was the inflation rate, as well as higher demand for premium segment products in certain regions. In minimum dosage units (MDU), the growth rate was –5.1%, with the sales volume of 144 million MDUs.

The October results were not much different from those usually observed during the fall-winter season, when sales of veterinary drugs start to decline at the end of the year, which is especially noticeable against the spring and fall demands. Compared to September 2020, the sales decreased by 8.4% in monetary and by 6.8% in physical terms. Compared to October 2020, the growth rates were –0.1% in monetary and –8.7% in physical terms. That is an obvious influence of the second wave of COVID-19, which resulted in higher demand for several groups of veterinary drugs last year.

In the top 20 companies with the largest sales volumes in monetary terms, Livisto Group and Zoetis have the best growth rates among the foreign veterinary manufacturers. The sales of anthelmintic Albendazole (increased 5.3 times against January–October 2020) and non-steroidal anti-inflammatory Petcam (+54%) contributed to Livisto Group’s growth rates of +29% the most. As for Zoetis (+24%), its insectoacaricide Simparica (+39%) and antibacterial Synulox (+33%) contributed to the growth rates the most. Agrobioprom has the highest growth rates (+21%) among the Russian companies in the top 20, thanks to the sales of its sedative VetSpokoin (+47%) and ear drops Otidez (+29%). 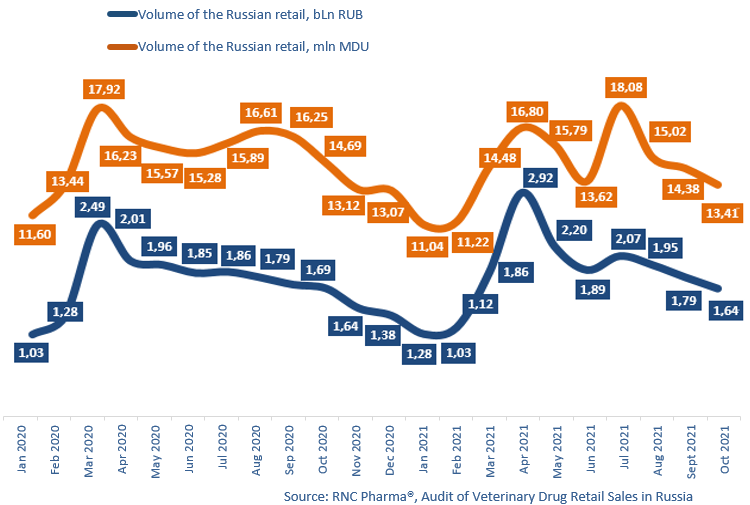