It seems that the moment of truth will come to the Russian pharmaceutical retail market next year. After several years of relatively stable development and a number of waves of rush demand in 2020, 2021 may become a period of a most severe crisis, making all the current problems associated with the launch of the labeling system seem like mere trifles.

Arguably, the crisis has already begun, since the incomes of the population has fallen by 4.3% by the end of Q3 2020 (the last time we saw dynamics as bad was back in 2016). The current frenzy that was triggered by the second wave of COVID-19 and incorrect operation of the labeling system seems to be the only stabilizing factor in the pharmaceutical retail now. The global macroeconomic factors marking a decline in demand are even worse than in 2015–2016; in addition to devaluation, the Russian economy had to go through a rather lengthy lockdown this year.

At the same time, the rush demand concerned a rather limited group of drugs, the stocks of which were almost completely used up in a couple of months. However, the issues with shortages that arose after also concerned those groups of drugs that had nothing to do with the virus. No one will probably argue that such conditions make effective retail operation impossible. In addition, large on-line companies continue to implement their plans to develop the categories of beauty and health. They are taking away more or less marginal products and active and solvent consumers from the classic retail. At the same time, that is not true for small regional companies, since the rules allowing the on-line sale of OTC drugs are so strict that pharmacy chains from half of the Russian regions have not submitted a single application at all.

Finally, there has been a systematic reduction in the total number of pharmacies in Russia since April 2020; as of September 2020, slightly less than 67.3 thousand pharmacies were operating, which is 1.8 thousand less than at its peak in March 2020. In fact, now the industry has rolled back to May–June 2019, even though the consequences of the abolition of UTII has not yet fully kicked in. 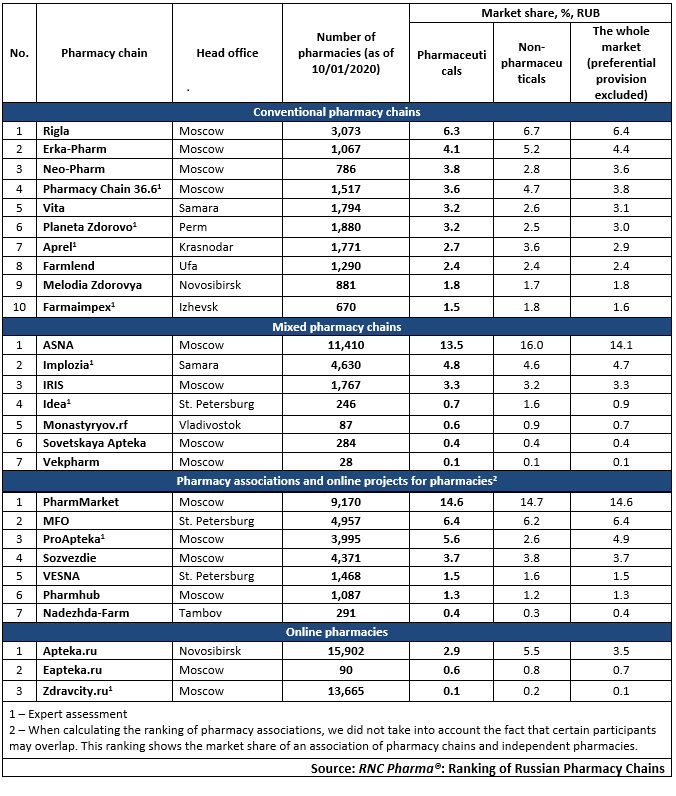