The work of all participants in the Russian pharmaceutical market was tremendously influenced by the well-known events of the early spring, with the surge in demand in the retail and public procurement segments fading into insignificant here. What is much more important is which effect the crisis will have on the logistics, as well as how it will reshape the relations between the manufacturer and the distributor, and the distributor and the pharmacy. With the stocks noticeably depleting and a risk of shortages for certain products coming closer, suppliers cannot but use certain segregation tools towards their partners. The suppliers rank them by priority, changing the working conditions by limiting volumes, reducing payment delays up to transferring to prepayment, requiring additional security measures in the form of bank guarantees and liability insurance, etc. This does not seem like a big problem for the industry as a whole, especially for large wholesalers, who tend to have fairly developed relations with the banking sector. But with the refinancing rate of 20% at the peak of the crisis, hardly anyone was tempted to actively use loans.

In the public sector, the problems are more or less the same as in the retail, except that the buyer, not the distributor, sets the conditions here, making it much more difficult for wholesalers to influence them. In fact, this puts the distributor in a situation when they are “between two fires”, and while the distributor can still somehow adjust their working process with manufacturers / suppliers through negotiations, government customers prefer to follow a certain procedure.

Certain measures to ease the conditions for suppliers by the public sector are being discussed at various government levels, including the proposal to abolish the mandatory security payments. However, this is objectively not enough, and the sector can easily lose a significant number of small and medium companies before any decision comes into effect.

Besides, we are witnessing another serious problem associated with suppliers refusing to participate in tenders due to the low initial maximum contract price (IMCP).

Not that long ago, the media posted about suppliers of a Pfizer vaccine for the prevention of pneumococcal infection and a combined Sanofi vaccine refusing to participate in tenders because they were not satisfied with the IMCP. Now manufacturers have launched the process of re-registration of the maximum retail price. Even if this whole story can seem like an attempt by companies to gain an extra argument in their negotiations with the Federal Antimonopoly Service, this is clearly a sign of a really serious industry problem associated with a sharp increase in the cost of production and drug import to Russia.

It concerns a rather extensive list of products that are essential for the healthcare system, including those that have no Russian alternatives, or the production of the alternatives take up only one stage of the cycle. Parallel imports could become a safety net, with their capabilities going far beyond solving problems associated with product range. This mechanism could be very effective as a factor limiting the supplier’s ability to put pressure on their partners. However, medicines were not included in the Ministry of Industry and Trade’s list of goods allowed for parallel import for the sake of objectivity, and they are unlikely to get included anytime soon, so the “golden time” of Russian pharmaceuticals hardly has a chance of reappearing. 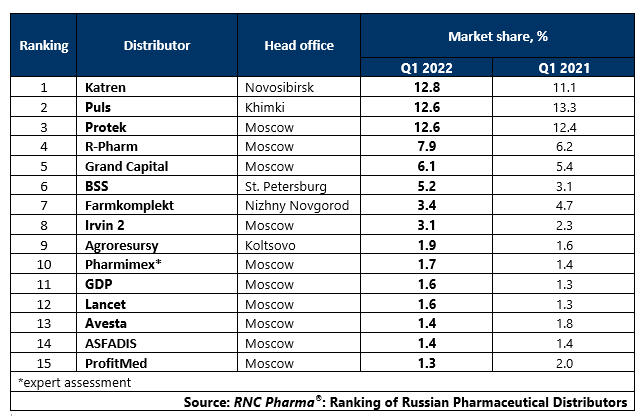