Veterinary Vaccine Import to Russia in 2019


Vaccines were the most imported veterinary product in 2019, accounting for 45% of the total import in monetary terms, which has not changed much in recent years. In 2019, Russia imported 16.9 bln RUB worth of veterinary vaccines (customs clearance prices), which is in monetary terms (rubles) 37.4% higher than that in 2018. The dynamics are high, but far from record-worthy, as there has been three better results in the last 10 years. The dynamics in physical terms (units) are +43.8%, with 9.4 bln units.

19 manufacturing companies were importing veterinary vaccines to Russia in 2019, with the top 5 accounting for more than 88% of the import in monetary terms. MSD accounts for the largest import in monetary terms, with 28.5% of the total import. The dynamics in monetary terms are only +5%, due to the company cutting down on the import of their key product (-2%), poultry vaccine Nobilis, which accounts for around one-third of the company’s import. Their cattle vaccine Bovilis has the highest dynamics (imports increased by more than 1.5 times).

However, if calculated in dosages, MSD comes second after Phibro Animal Health Corporation (USA), which accounts for 53.8% of the import, while MSD accounts for 16.5%. The American company’s key product is live vaccine for poultry Tabic, accounting for 95% of the company’s import in dosages or 70% in monetary terms. Among the top 5 companies Zoetis has the highest import dynamics in monetary terms, having increased their import of vaccines by 2.9 times in monetary terms and by 2 times in dosages. Their key product is swine vaccine Suvaxyn (imports increased by 2.9 times). 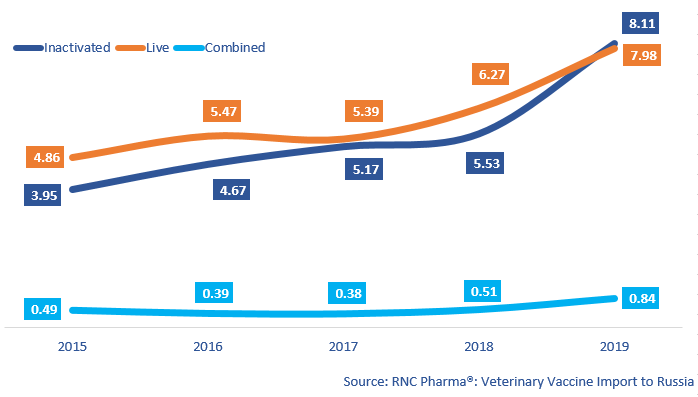