Despite the pessimistic results of the first two months combined, the February results seem a bit better than the January ones. In February 2018, Russia produced 24.9 bln RUB worth of drugs (dispatch prices, VAT included), which is in monetary terms 0.7% higher than that of February 2017 and 4.2% lower in physical terms (against -5.7% in January 2018.)

Between January and February 2018, Pharmstandard and Tatkhimfarmpreparaty witnessed the biggest fall in sales, with -24% and -19%. Out of the top 20 companies, Promomed and Slavyanskaya Apteka made the best progress, with a 3.7 and 3.6 times growth. For Promomed, the product that contributed to the success is Ceftriaxonum, with its production having increased by nearly 100 times over the year. For Slavyanskaya Apteka, this product is Naftizin, with its production having increased by 3.9 times over the year. 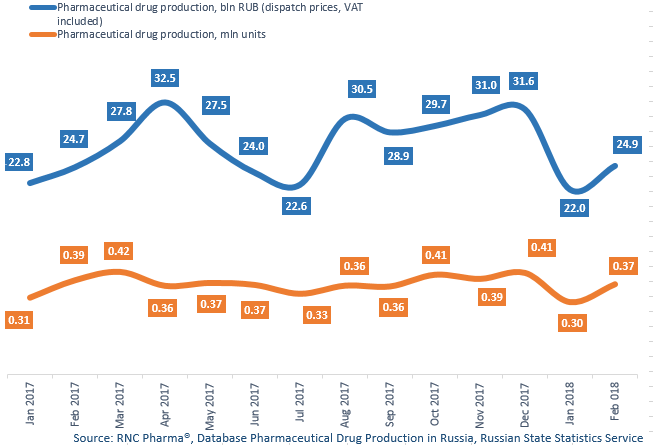