From January to October 2021, Russian manufacturers produced RUB 489.1 billion worth of pharmaceutical drugs (manufacturer’s prices, VAT included), down 21.2% from the same period in 2020. In physical terms, the growth rate was –16.8% due to the so-called “high base effect”, essentially meaning that large volumes of drugs used for the treatment of coronavirus were produced last year. The total production volume in January–October 2021 was 3.34 billion packages, or 61.1 billion minimum dosage units (MDU). Notably, the growth rate is higher if calculated in MDUs compared to packages, albeit still negative, –6.3%.

Apart from the ten-fold growth rates of Medgamal, a branch of the Gamaleya Research Institute of Epidemiology and Microbiology, Velpharm still has the highest growth rates of +78% in physical terms among the top 25 manufacturers of prescription drugs. The company has added another 11 brand names to its product line over the past year. The production of Azythromycin (increased 13.5 times), Diclofenac (17.8 times), and Lidocaine (6.3 times) contributed to the growth rates the most. Outside the top 25, Ruzpharma has impressive growth rates—its production increased 6.2 times against the previous year. The company, which is also a veterinary manufacturer, was producing only three pharmaceutical drugs in January–October 2021, with third generation cephalosporins Cefotaxime and Ceftriaxone contributing to the growth rates—the manufacture grew 13.2 and 7.9 times against 2020, respectively.

As for OTC drug producers, Abbott and Valenta had the best growth rates of +25% and +24%, respectively. The production of Abbott’s Motilak had the highest increase (3.8 times), along with Xilen (+14%). Kreon and Duphalac, which were not manufactured in the comparison period, also contributed to the growth rates. Valenta was able to maintain its high growth rates thanks to the production of Trimedat (grew 2.4 times) and Grammidin (2.1 times). Outside the top 25, Menarini Group managed to increase its production 7.2 times. The production of the company’s two OTC drugs is localized, and the growth rates of both are many-fold—12.7 times for Prostamol and 7 times for Mezym. However, that is more likely the result of a relatively small production volume in January–October 2020, rather than increased localization activity. 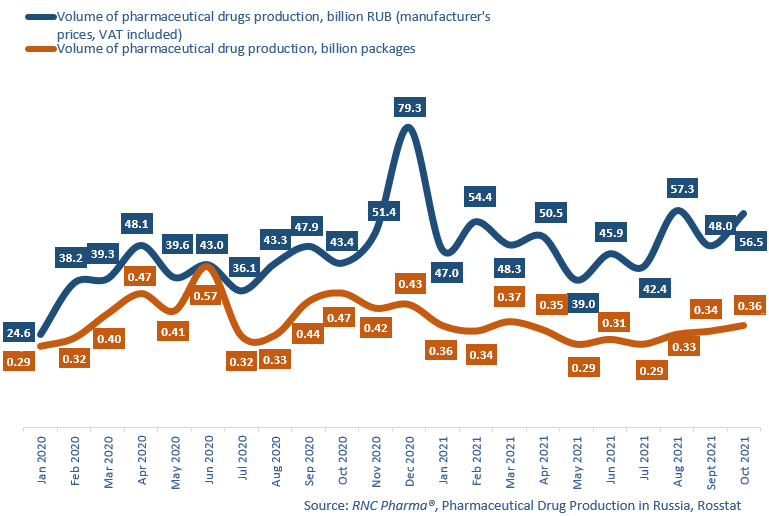