The import of pharmaceutical drugs in June 2022 generally followed the trends of the first six months of 2022. The growth rate was 18% for the import of ready-made drugs, while the import of bulk drugs increased 2.9 times against June 2021, which can be explained by the so-called “low base” (back in June 2021, Russia imported 8.3 billion rubles’ worth of bulk drugs—nearly half the average in 2021). Yet, the results of June 2022 could actually be called outstanding, because Russia imported more than 24 billion rubles’ worth of bulk drugs, mostly expensive items.

Due to what is happening in the world right now, the structure of payments for imported drugs in January–June 2022 underwent significant changes. First, the share of imports of ready-made drugs paid in Russian rubles slightly decreased—from 94.3% in Q1–Q2 2021 to 92.5% in Q1–Q2 2022. Second, the number of payment currencies grew by four, including rather unusual for the Russian pharmaceutical market currencies, such as the Polish zloty and the Canadian dollar. Finally, the share of imports paid for in Chinese yuans increased more than 6 times against Q1–Q2 2021.

AstraZeneca had the best growth rates among the top 20 importers of ready-made drugs in June 2022—its imports went up 8.6 times in monetary terms against June 2021. The import of its anticancer drug Lynparza increased 28 times, which contributed to the company’s growth rates the most. AstraZeneca is followed by Astellas (imports grew 4.3 times); its antitumor agent, antiandrogenic drug Xtandi, helped the growth rates. 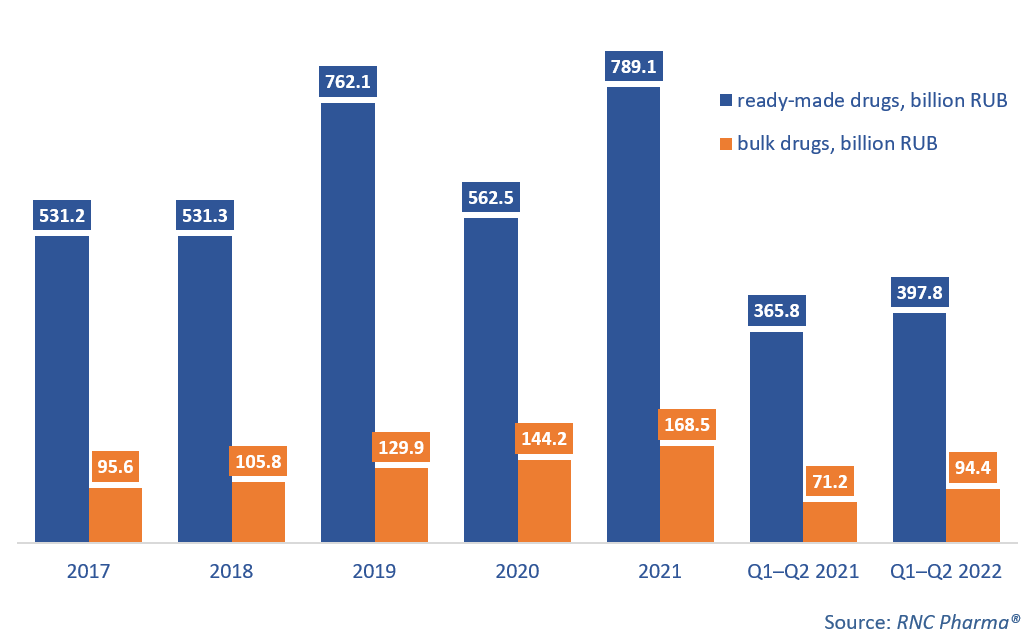