The veterinary market in Russia kept stagnating between January and April 2021. The growth rate is only +1.7% in monetary terms, with the sales volume of 6.93 billion rubles (retail prices, VAT included). In fact, the growth rate was positive mostly due to inflation, while the sales in physical terms kept decreasing. The sales volume in physical terms amounted to 53.9 million minimum dosage units (MDU), down 8.5% from January–April 2020.

In many ways, the positive growth rates in rubles in was achieved thanks to the April results, when, after two months of decline, the growth rates were 45% in monetary and 3% in physical terms. However, if you look closely, it could be explained not by the growth of purchasing activity in physical terms, but by April 2020 being an atypical season. March 2020 saw a surge in incidence following abnormally warm weather, and then a natural recession in April. This year, the weather conditions were quite normal, and April saw the seasonal surge in sales.

It is also important to note how the growth rates differed depending on the price group. Despite the general drop in household income and seasonal changes, low-priced drugs were the group with the biggest drop in demand: in January–April 2021, drugs costing less than 100 rubles accounted for 18% of the sales in monetary and 66% in physical terms, whereas a year earlier they accounted for 21% and 71%, respectively. The sales decreased by 14% in rubles and by 15% in MED. The share of drugs costing from 300 to 500 rubles saw the biggest increase: from 16% to 18% in rubles and from 5% to 6% in MED. This group also had the highest growth rates: +14% in rubles and +16% in MED, which looks like an undoubted success against the background of general market stagnation. In addition, this is a graphic example of the fact that the active promotion actually determines the success in the market even in the face of falling household incomes.

Euracon Pharma had the best growth rates among the top 25 companies with the largest sales volumes between January and April 2021. The company’s sales increased 11.8 times, guaranteeing the company 22nd place in the ranking. Drug for cats and dogs Caniquantel was the only one that contributed to the growth rates. Livisto Group also had high growth rates (+46% in monetary terms), coming 16th. Between January and April 2021, the company’s product line included 27 brands. Non-steroidal anti-inflammatory drug Petkam (meloxicam for dogs and cats), as well as antibiotic Doxifin (doxycycline for dogs and cats) contributed to the growth rates the most. The sales were up 85% and 69%, respectively. 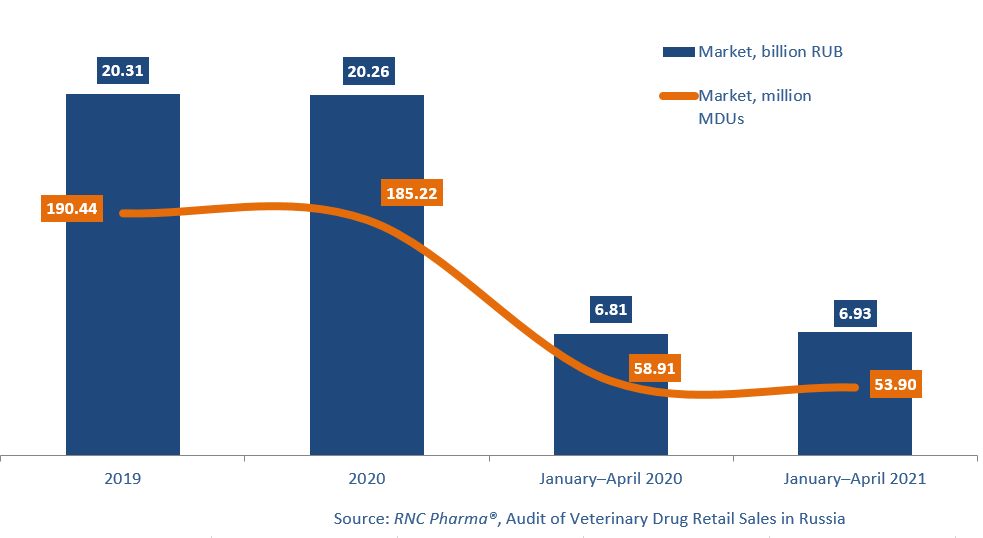