Unfortunately, 2018 was not a profitable year for Russian pharmaceutical production. In 2018, Russia produced 336 bln RUB worth of pharmaceutical drugs (dispatch prices, VAT included), which is in monetary terms only 0.7% higher than that of 2017. These dynamics is the lowest since 2015. In physical terms, the dynamics are -5.3% (4.3 bln units of pharmaceuticals.)

In December 2018, Russia produced 3.4 bln MDUs of both Rx and OTC drugs. Among the top Rx drug producers in physical terms, Vertex has the highest dynamics (+27%.) In 2018, it started to produce 11 new trademarks. Its Bisoprolol has the biggest production volume, while Rosuvastatin has the highest dynamics (a 3.5 times increase.) KRKA has also increased its production (+21%), especially the production of Valsacor (a 17 times increase.) 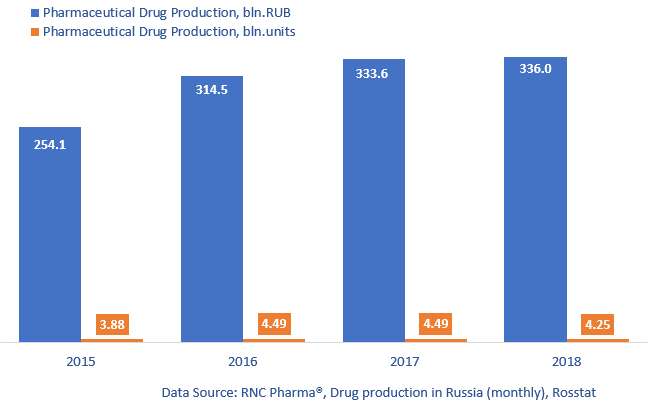