In January–November 2021, Russian manufacturers produced 546.4 billion rubles’ worth of pharmaceutical drugs (manufacturer’s prices, VAT included), up 20.1% from the same period in 2020. In physical terms, the production volume was 3.73 billion packages, down 16% from 2020. If calculated in minimum dosage units (MDU), the growth rate was also negative (–5.1%), with the production volume of 70.9 billion MDUs.

The activity of Russian pharmaceutical manufacturers in November 2021 was pretty much the same as before. The growth rate in monetary terms (rubles) was 11.4%, and the production volume was 57.3 billion rubles. In physical terms, however, the growth rate in packages was negative (–8.8%), but positive in MDUs (8.1%).

While the growth rates in physical terms in November were more or less on the same level for both Rx and OTC drugs, they were drastically different in January–November 2021 (–10.8% for prescription drugs and –20.5% for OTC drugs).

Ruzpharma and Rus Biopharm had high growth rates in January–November 2021 among the manufacturers of prescription drugs; the former increased its production 6.2 times in packages, and the latter 4.1 times. Since both manufacturers are outside the top 25, they usually do not make it to our column, despite consistently high growth rates this year. While the companies’ names sound similar, their product lines are far from similar. Ruzpharma, for instance, manufactured only three products in January–November 2021, with all of them injectable cephalosporin antibiotics. In fact, only the production of Ceftriaxone made a significant contribution to the growth rates; it increased 7.9 times from January–November 2020. Rus Biopharm has a wider range of manufactured products; it has grown from 6 to 25 trademarks over the year. Combination bronchodilators Respisalf and Respiforb contributed to the growth rates the most (the production increased 3.2 and 2.5 times, respectively).

As for the producers of OTC drugs outside the top 25, Pranapharm, Vostok and Beryozovsky Pharmaceutical Plant have high growth rates (the production grew 10.8, 5.2, and 4.2 times, respectively). Pranapharm (Samara) manufactured only one product, venotonic Troxerutin. Vostok (Kirov Oblast) produced one drug, enterosorbent Polyphepan, as well. The plant bought the rights for the product from Signtech (St. Petersburg), and the drug is now produced by both companies simultaneously. Just like the other two manufacturers, Beryozovsky Pharmaceutical Plant also worked with one drug, antihistamine Desloratadine. However, the company is only responsible for the secondary packaging—the drug is produced by Macedonian Replek Farm. 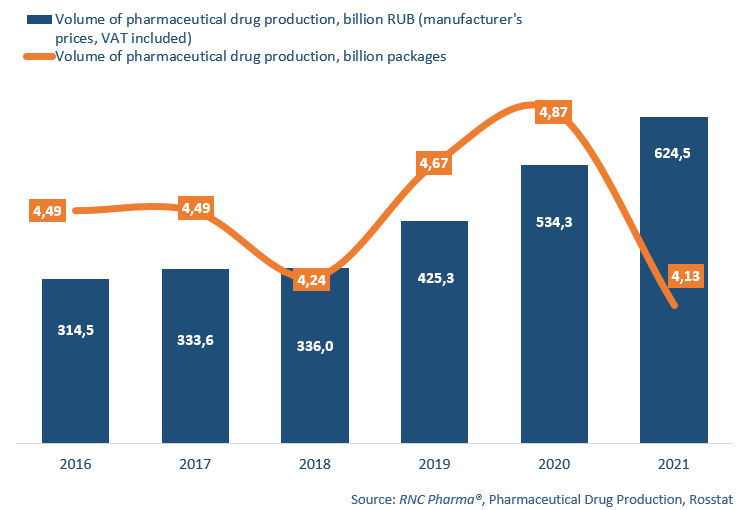