Between January and November 2020, Russia produced RUB 450.7 bln worth of pharmaceutical drugs (manufacturer’s prices, VAT included), which is in monetary terms (rubles) 17.4% higher than in 2019. The production volume in physical terms (units) amounts to 4.4 bln units, with the growth rate of +6.5%. If calculated in minimum dosage units (MDU), the growth rate is higher (+10.7%) and the production volume is 74.6 bln MDUs.

In November 2020, the production volume in monetary terms amounted to record-high RUB 51.6 bln (the previous maximum was registered in April 2020, RUB 48 bln). Despite the high volume, the growth rates did not set any records, with +21% in monetary and -20.7% in physical terms. The negative growth rates in physical terms is first and foremost a result of the so-called high-base effect, since at the end of last year, Russian manufacturers were hard at work preparing for the launch of the labeling system by stocking up their warehouses. However, the new reality brought by COVID-19 also affected the growth rates, so that the demand in the fall 2020 was far from the usual. Just as almost always, the production growth rates between January and November 2020 were vastly different for Rx and OTC drugs: +14.7% for the Rx drug production and only +0.4% for OTC.

Usolye-Sibirskoye Chemical and Pharmaceutical Plant has the highest growth rates among the top 30 manufacturers of Rx drugs (its manufacture has grown by 14.4 times in physical terms). The production of Phenibut (grown by 9 times) and Euphyllin (by 41 times) contributed to the growth rates the most. The company’s production line has also significantly expanded. Mosfarm comes second with a 14x growth. The company started producing two new drugs this year, which has yet to contribute to the growth rates. However, the production of solutions for infusion Sodium Chloride and Glucose has grown by 13 and 23 times, respectively. As for the companies outside the top 30, Octapharma has increased its production by 91 times, with Octanat, Octanine and Vilate contributing to the growth rates. The three drugs are packaged at Skopinpharm (Pharmimex group).

Among the top 30 producers of OTC drugs, the leader in growth rates is again Usolye-Sibirskoye Chemical and Pharmaceutical Plant (manufacture grown by 5.4 times). Its Rimantadine contributed to the growth rates the most, since its manufacture has increased by 27 times. Outside the top 30, Vest (former Iodine Technology and Marketing) has increased its production by 14 times. The company’s Ammonia, Chlorhexidine and Salicylic Acid contributed to the growth rates. 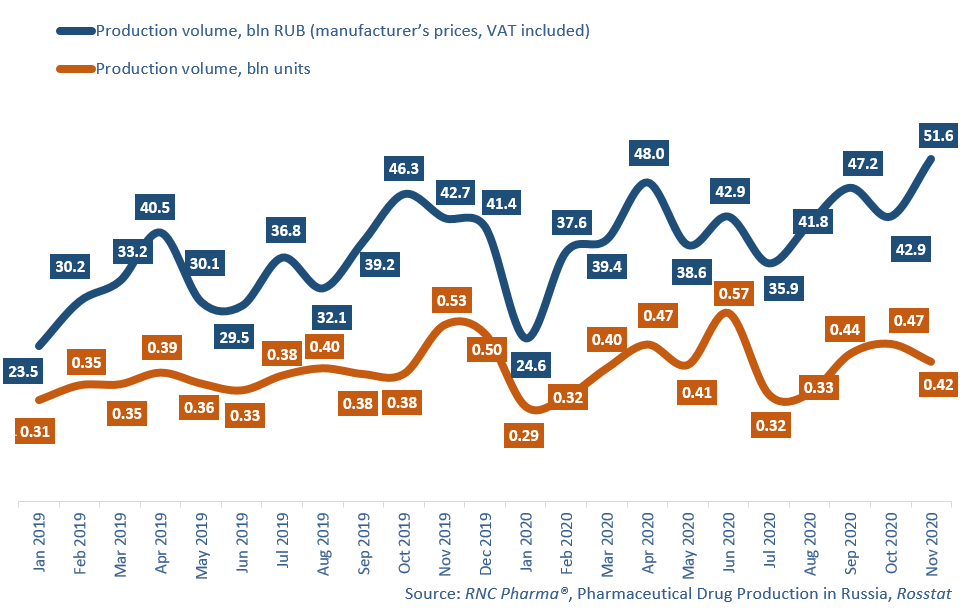