However, Belarus is still the first among the main directions of export, with 5.9 bln RUB (around 18% of the total export from Russia). The dynamics in monetary terms are +37%. Belarus is followed by Ukraine, with 16.3% of the total export and the dynamics of +12%. The Donetsk People’s Republic and the Luhansk People’s Republic account for 94% of the exports to Ukraine. The import line consists of Russian-made pharmaceuticals (around 42%) and gray exports of foreign pharmaceuticals, which the actual license holders might not even be aware of.

The exports to Nigeria have the highest dynamics (exports increased by 5.5 times). The Chumakov Federal Scientific Center for Research and Development of Immune and Biological Products of Russian Academy of Sciences was the only exporter to Nigeria; and Yellow Fever Vaccine was the only pharmaceutical drug exported. The dynamics are that high because the vaccine was mostly exported in July and September this year against October last year.

Indonesia and Mauritania were also among the newcomers, importing Semax from Peptogen and Yellow Fever Vaccine from the Chumakov Federal Scientific Center for Research and Development of Immune and Biological Products of Russian Academy of Sciences, respectively.

Top 15 directions of the export of pharmaceutical drugs from Russia (including to the EEU countries), January – September 2019, in monetary terms 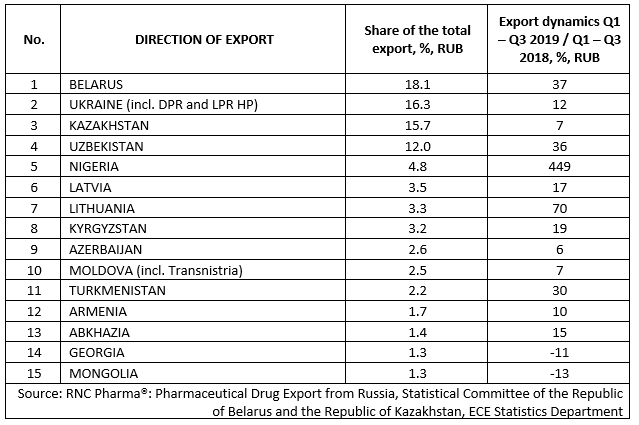