Between January and March 2019, Russia produced 86.9 bln RUB worth of pharmaceuticals (manufactures’ dispatch prices, VAT included), which is in monetary terms 14.7% higher than that of the same period of 2018. However, the dynamics in physical terms are only +0.5% (1.01 bln units).

Keeping up with this year’s tendencies, the dynamics of the Rx drug production for the period are +8.3%, while those of the OTC drug production are -4.5%. Among the top 10 Rx drug manufacturers with the highest growth, Groteks is the leader, with +49% in physical terms. Between January and March 2019, it mainly produced Sodium Chloride (44% of the company’s production), Lidocaine (6%), Novocaine (5%), and Glucose (5%). Pharmstandard follows with +45%; over the period, it focused on Combilipen (15%), Phosphogliv (10%), Picamilon (9%), and Formetine (8%).

Among the top OTC drug manufacturers, Samaramedprom remains the leader, with a 2.5 times increase. Its Formic Alcohol (17% of the company’s production), Menovazin (15%), Iodine (12%), and Sodium Borate (12%) contributed to the dynamics the most. Pharmstandard places second yet again with +42%; its Citramon (10%), Activated Carbon (9%), Rinostop (9%), and Corvalol (8%) contributed to the dynamics. 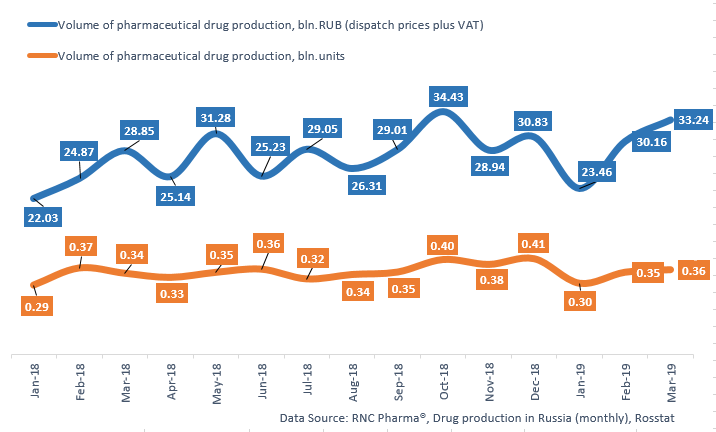