Russia imported from 43 countries, with China accounting to the largest volumes in physical and monetary terms and India not far behind. The growth rates of the Chinese imports were lower than the average market ones. A decrease in China’s share was especially noticeable in physical terms (from 54.7% in 2020 to 52.5% in 2021). However, the import volume from India grew significantly ahead of the average growth rates, with the country’s share increasing from 22.6% to 24.1% in tons.

The total number of APIs in INNs also grew steadily, with 668 INNs in 2021, which is an all-time high, against 623 in 2020. Among the 20 most imported APIs in monetary terms, the imports of Pancreatin (imports increased 6.8 times in rubles) and Dapagliflozin (4.3 times) had the highest growth rates. The main buyer of Pancreatin in 2021 was Veropharm, accounting for almost 78% of the import volume in monetary terms. The company used Pancreatin in the production of Kreon, most drug forms of which are localized on the Belgorod site of Veropharm. As for Dapagliflozin, the only importer was AstraZeneca, using it for the production of Forxiga, localized at the company’s own facility in Kaluga Oblast. Enoxaparin Sodium also showed high growth rates in 2021 (imports increased 2.6 times). The API was imported by 8 different companies, and by the end of the year it became the most imported API in monetary terms, with Sotex and Sanofi purchasing 69% of the imported volume.

Lactulose (+75% in tons) and the aforementioned Pancreatin (+71%) had the best growth rates among the 20 most imported APIs in physical terms. Veropharm and AVVA Rus accounted for the largest import volumes of Lactulose. Still, it is the APIs outside the top 20 that had the highest growth rates. In particular, the import of Favipiravir more than tripled compared to 2020, with nearly 86% of its imports accounting for commercial APIs. Drug Technology, Promomed, and Bratskhimsintez were the main importers. The imports of Diclofenac (increased 2.8 times) and Magnesium Orotate (2.5 times) are also worth mentioning. Diclofenac was purchased mostly by Sintez, and Wörwag Pharma imported Magnesium Orotate for the production of Magnerot at the facilities of the Russian Pik-Farma Lek in Belgorod Oblast. 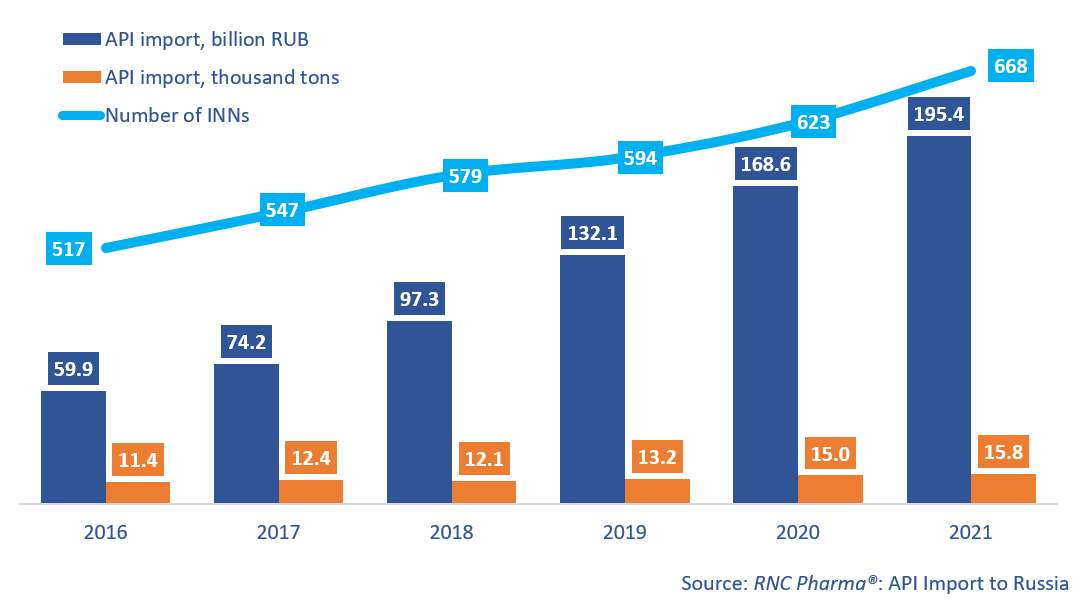