The incidence of COVID-19 has been going up since September, with November bringing records one after another, both in large cities and in Russia as a whole. Naturally, the demand for certain “corona-specific” drugs has also been increasing. With that more or less predicted, the market participants at all stages of commodity distribution, including wholesale, were preparing for an increase in morbidity associated with the end of the vacation season and the start of the school year when the labeling system altered the situation. As a result, the pharmaceutical market was faced with a severe out-of-stock crisis, the consequences of which have not yet been resolved. In a sense, the rush demand not so much stimulated the growth of revenues of Russian wholesalers, as it increased the load and labor costs.

Apart from those tactical problems, the industry is trying to solve strategic problems. The pandemic can come to the real end only when large-scale vaccination has been achieved, and here, in addition to managing the difficulties associated with the scaling up of production, a completely different level of logistics will be necessary, which is the storage temperature regimes for existing vaccines and a fundamentally different scale of the task. Of course, the financial aspect is also interesting since an absolutely new and very impressive segment of the market, financing of which will be provided at the expense of public funds, will be formed in a very short time.

In the past two years, the state segment has been developing at a rate that significantly exceeds that of the retail market. Although the latter has seriously improved this year thanks to the coronavirus situation, the reserves have nearly been used up. Stressful consumption always ends up in a collapse, especially since the incomes of the population plummeted due to the spring lockdown.

The effect of the implementation of the National Project on the market dynamics in the next year will also most likely begin to fade, because the retail is far from becoming even a safe haven, a catalyst is out of the question. That is why the market and its participants will need new directions to expand, and here participation in the vaccine prevention program is almost the only chance for the wholesale business to continue its development next year. 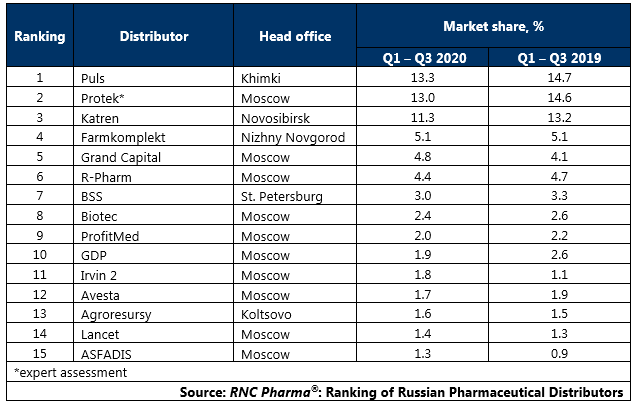