Between January and July 2019, Russia imported 69.5 bln RUB worth of APIs (free circulation prices, VAT included), which is in monetary terms (rubles) 26.5% higher than that of the same period in 2018. As earlier, a significant price increase contributed to the high dynamics. In physical terms (tons), the dynamics are +4.5%, with the import volume of 7 thousand tons.

The product line of pharmacopoeial APIs has grown by 19 positions, making it 504 INNs. Dydrogesteronum, imported by Veropharm, is the absolute leader in dynamics, with a 100 times increase. Abbott localized the production of Duphaston at the facilities of Veropharm.

The product line of commercial APIs has grown from 86 to 96 INNs. Narlaprevirum, imported by R-Pharm since April 2019, is the leader in physical terms here. Rimantadinum, mostly imported by Grand Capital and Mirakl Farm, has the highest dynamics in monetary terms, with a 96 times increase. However, the seasonal trends contributed to the growth the most. 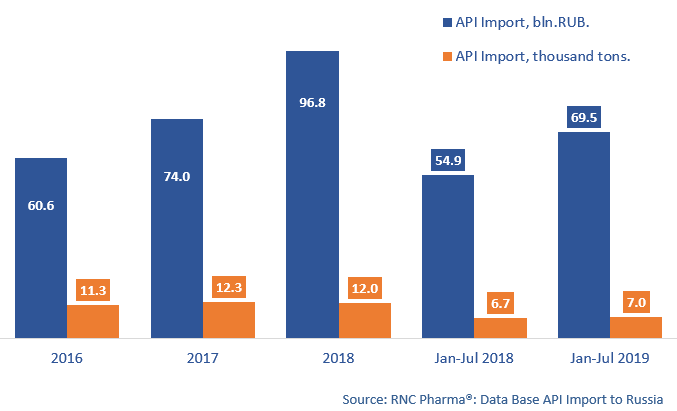