Between Q1 and Q2 2021, the sales of veterinary drugs in the Russian retail market amounted to 11 billion rubles (retail prices, VAT included), up only 3.8% in monetary terms (rubles) from 2020, which is much lower than the inflation rate of 8.3%. In physical terms, the market volume amounted to 93 million minimum dosage units (MDU), with the growth rates of +3.1%.

After the rapid growth in April and May 2021, a calm period, the so-called low season, came in June, when the demand for the most popular pharmacotherapeutic groups naturally decreased. The growth rates in June 2021 were +1.8% in monetary and -11.8% in physical terms. To be fair, these are far from the worst results of the first six months of 2021; the growth rates were much lower in February and March, but that was due to atypical climatic conditions in early 2021, which lead to a shift of the peak season. Now it is the economic situation that has a significant impact on the demand.

Manufacturers from 29 countries were selling veterinary products in Russia in Q1–Q2 2021, with the US companies accounting for 38.1% of the market in monetary (+1.6%) and around 17.4% in physical terms (+0.6%). MSD had the largest sales volume among the American companies, with the growth rates of +3.2% (in rubles) and -0.3% (in MDUs). Zoetis had the best growth rates of +23% and +10.3% (in monetary and physical terms, respectively). Insectoacaricide Simparica (+39% in rubles) and antibiotic Synulox (+34%) contributed to the growth rates the most. Euracon Pharma (Germany) still has the best growth rates among the foreign companies; its sales increased 14 times in monetary terms over the year. This year, the company was selling only one product in Russia – anthelminthic Caniquantel.

The Russian veterinary manufacturers had the largest sales volumes, accounting for 65.5% of the market in physical terms. However, the total share of the Russian companies decreased by 0.3% in physical and 1.8% in monetary terms (from 33.8% to 32%). Only 6 companies in the top 15 had positive growth rates, with Agrobioprom and Askont+ having the highest ones (+23% and +17% in monetary terms, respectively). Eardrops Otidez and insectoacaricide Binakar contributed to the growth rates of Agrobioprom (+30% and +25%, respectively). As for Askont+, its growth rates were positive due to the sales of Gabivit-SE (increased 2.2 times over the year), Butastim (2 times) and Eleovit (+35%). 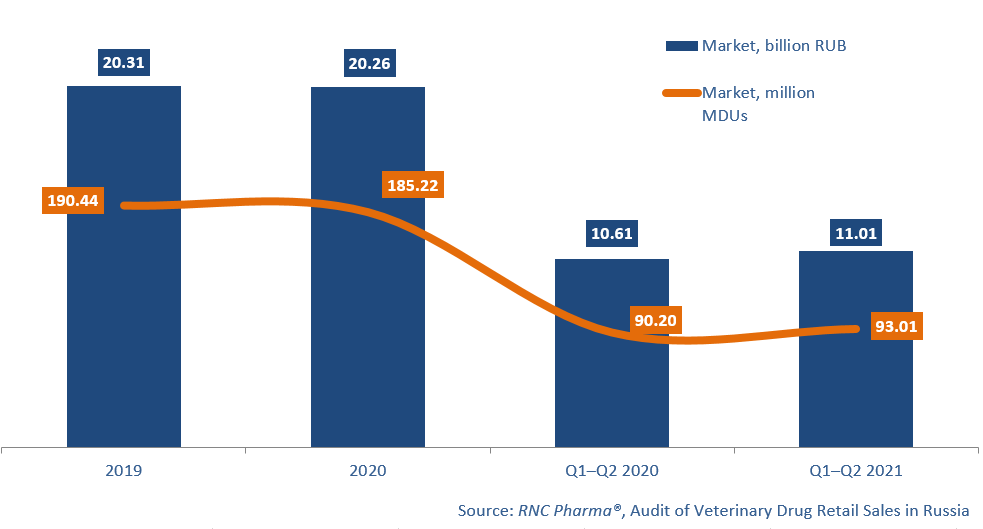