Between January and May 2021, the sales of veterinary drugs in the Russian retail market amounted to 9.3 billion rubles (retail prices, VAT included), down 6.1% from January–May 2020. Despite the high inflation rates and the prices up 11.7%, the growth rate of the sales volume in physical terms (minimum dosage units, MDU) was +7.4%. The sales volume of veterinary drugs amounted to 80.3 million MDUs.

The growth rates in physical terms were positive thanks to the hard work of the market participants during May 2021; with “high season” coming, the sales began to increase rapidly. The sales increased by 66% from May 2020, which is the best result not only of 2021 so far, but also of the past 18 months. At the same time, the growth rate in monetary terms (rubles) for May 2021 was noticeably more modest: +21%, while it was +45% back in April.

Russian veterinary products in January–May 2021 still accounted for the largest proportion on the market: 38% in monetary and 77% in physical terms. The proportion of Russian drugs on the market in physical terms significantly increased vs January–May 2020, when domestic products accounted for 69% of the market. Several factors at once led to import substitution, including higher inflation rates, declining household incomes, as well as domestic manufactures actively promoting their products. While not many have made targeted investments in marketing yet, with a competent promotion strategy, the results are usually positive.

In monetary terms, however, the proportion of Russian veterinary drugs not only stayed the same, but also showed a possible declining trend; it barely exceeded 38% in January–May 2021 against at least 41% a year earlier. This happened due to the growing demand mainly for low-priced products, as well as due to the speedy growth in prices for imported products. The price index for domestic veterinary drugs in January–May 2021 amounted to 10.4% and 12.5% for imported drugs. Agrobioprom has the highest growth rates in monetary terms among the top 15 Russian manufacturers of veterinary drugs (+26%), followed by Askont+ (+18%). Eardrops Otidez and sedative and antiemetic Vetspokoin contributed to the growth rates of Agrobioprom (+38% and +70%, respectively). As for Askont+, its growth rates were positive due to the good sales of drugs for livestock Gabivit-SE (increased 2.2 times over the year) and Eleovit (+37%).

Euracon Pharma has the best growth rates among the top foreign manufacturers. The sales of its anthelmintic for cats and dogs Caniquantel grew 14.8 times in monetary terms against January–May 2020. 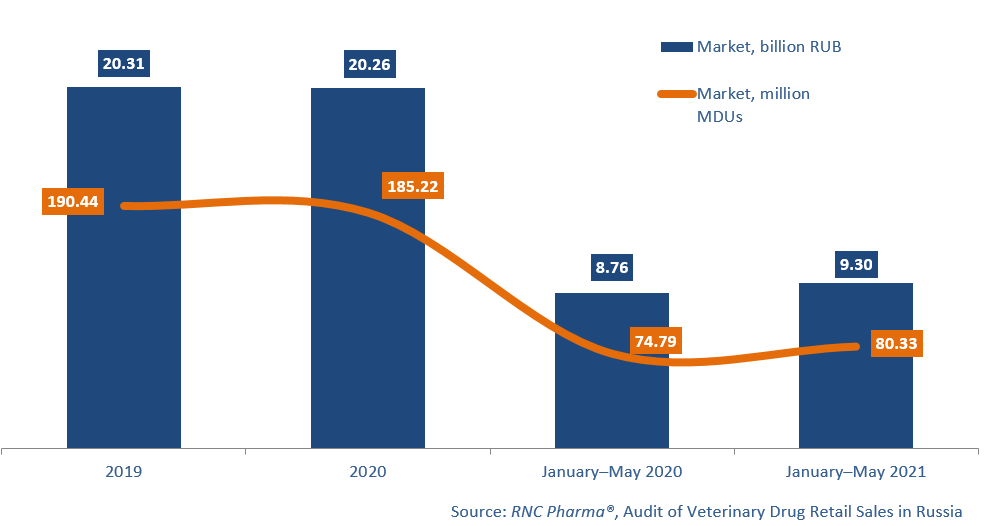