It is unlikely that the Russian pharmaceutical market players that launched various anti-crisis programs a couple of years ago could have guessed that early 2020 would shock them with the coronavirus, rush demand and desperate regulatory activity. While they could feel a crisis approaching, they were still preparing for something else.

The rush demand, as one would expect, turned to be quite short. The panic began in late February, peaking in March, and the market returned to its typical stagnation in mid-April. That would not be bad if it were not for the “half-quarantine”, which would lead to a halt in the work of a number of industries, a serious drop in incomes of the population, and, therefore, a coming reduction in demand. At the same time, the trends of uneven development of different market sectors continued, with the public sector developing more dynamically than the retail, even despite COVID-19. This is reflected in the rankings: the share of the largest Russian pharmaceutical distributors continues to decline for the third year in a row.

The epidemic and its accompanying processes were unable to help get rid of the other industry risks, including the abolition of UTII or the remaining uncertainty surrounding the mandatory drug labeling, and, in some cases, these risks only worsened. The state regulation was among those; the number and speed of adoption and subsequent cancellation of certain resolutions of the government in March and April 2020 seem to have broken all conceivable records.

However, real achievements could still be found among all the informational garbage. For example, the process and format of the online pharmaceutical trade finally got the legal basis, though only for the OTC category. This decision will launch a number of in-depth transformations of the industry, including those of the pharmaceutical wholesale.

In addition, there were some quite unusual ideas, such as proposals for a possible revival of the legendary Main Pharmacy Directorate, however, the infrastructure and terms of reference are not yet clear. 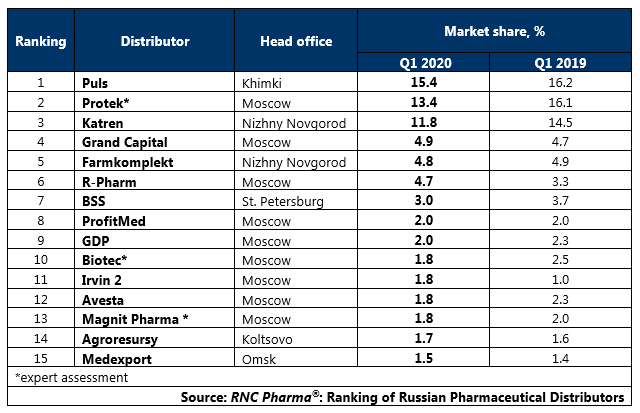